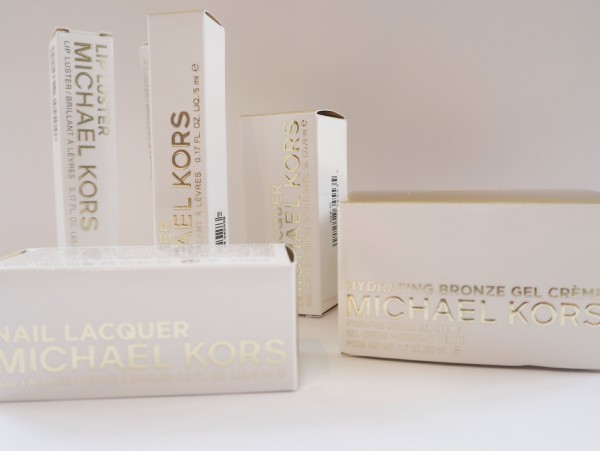 It’s definitely a happy blogging day when some new Michael Kors comes along. Straight away I love the vibrancy of this collection and the fact that you can go bright, go nude or go a bit of both.

First up, the nails, and the Hydrating Bronze Gel Creme. Michael Kors is good at bronzing products – especially, I’d say, for those of us who don’t want a TOWIE tan, but prefer to keep it subtle and glowy.  Hydrating Bronze Gel Creme is a cooling, gel-cream consistency that’s more of a gentle illuminator than anything. No big shards of glitter or anything like that – it’s light catchy in a subtle, sheeny way rather than shimmer and sparkle, which means that you can use it anywhere on your body; face, arms or legs.

The Nail Lacquer comes in three shades (missing from here is pink toned Blush). The paler shade you can see is Daydreamer; a pale, creamy nude. My hopes were raised for a moment because my all-time, never found again, ultimate nude nail shade was a limited edition Michael Kors. But, this one is a little on the light side to be a true replacement. The cream orange shade is Paradise, and they’re all £15.

My favourite items from the Michael Kors Into The Glow range are the glosses – in particular Fire Coral which is an amplified coral shade with a mild metallic sheen. It’s beautiful on the lip. The pink shade is Getaway, and the clear sheen is Dew, full of iridescent shimmer.

So, here you can see that Getaway has a raspberry tone and is semi-sheer, Dew is completely sheer but for a few glimmers and then Fire Coral which I just want to wear all the time now. I’ve also swatched the Gel Creme – this is the paler shade (of two) and you can see that it’s very subtle. The formula is also hydrating, so it doesn’t just sit on the skin, but actually softens it, too.

The Michael Kors Into The Glow collection launches in April (gloss is £21.50, nail polish is £15, Gel Creme is £25. While I alway love the sleekness of MK packaging, this time around I noticed that the glosses are so angular that I had a bit of an ouch moment taking the lids off them.. they don’t feel nice in the hand at all. It’s a detail, but at £21.95, I’d prefer for it not to be uncomfortable!