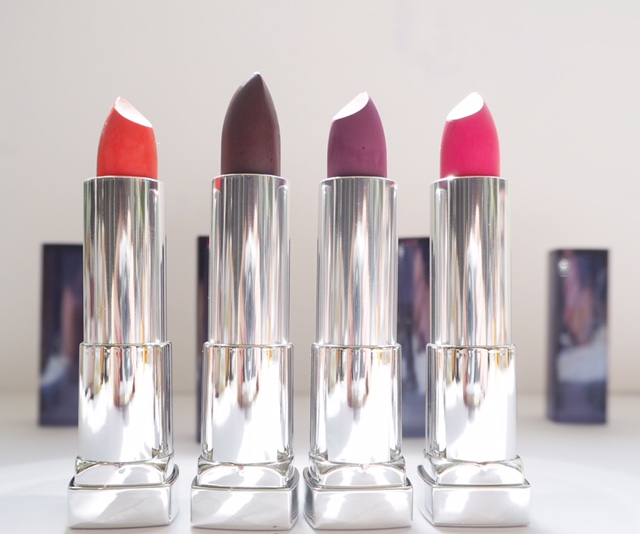 This is turning out to be rather a lipstick-y week – and so many new Maybelline launches heading our way. Next up is the Maybelline Loaded Bolds – one swipe of dense, intense matte colour. I’ve got some of the very wearable shades here but if you’re looking to experiment, you’re in the right place – in the US the twenty shade line-up covers off blue, black and grey but we won’t get all of them in the UK. They’ll be around from August.

I’m probably the right person to be testing these because I don’t like mattes and I’m the first to see the disadvantages of a matte product. However, I’ve been wearing a bright pink this morning (not out!!!) and there is no way to tell when the product is on the lip in terms of feel that it’s matte. It is SO creamy – if I had to blind test this, I’d put it at a satin just by the lip comfort and sensation. A product like this is such a good example of not having to pay over and above for lipstick unless you want to – the Maybelline Loaded Bolds are near perfect.

I find it interesting that the lipsticks feature a clay base which you would expect to be drying – it’s quite the opposite and the formula doesn’t shrink on the lip to add extra crinkles. The shades confirmed for the UK are in the swatch above from bottom to top: Midnight Merlot, Orange Danger, Berry Bossy and Fiery Fuchsia (the one I tried). It’s strange that we’re not getting the grey shade or either of the blues given that they’re both such a strong trend for next season.