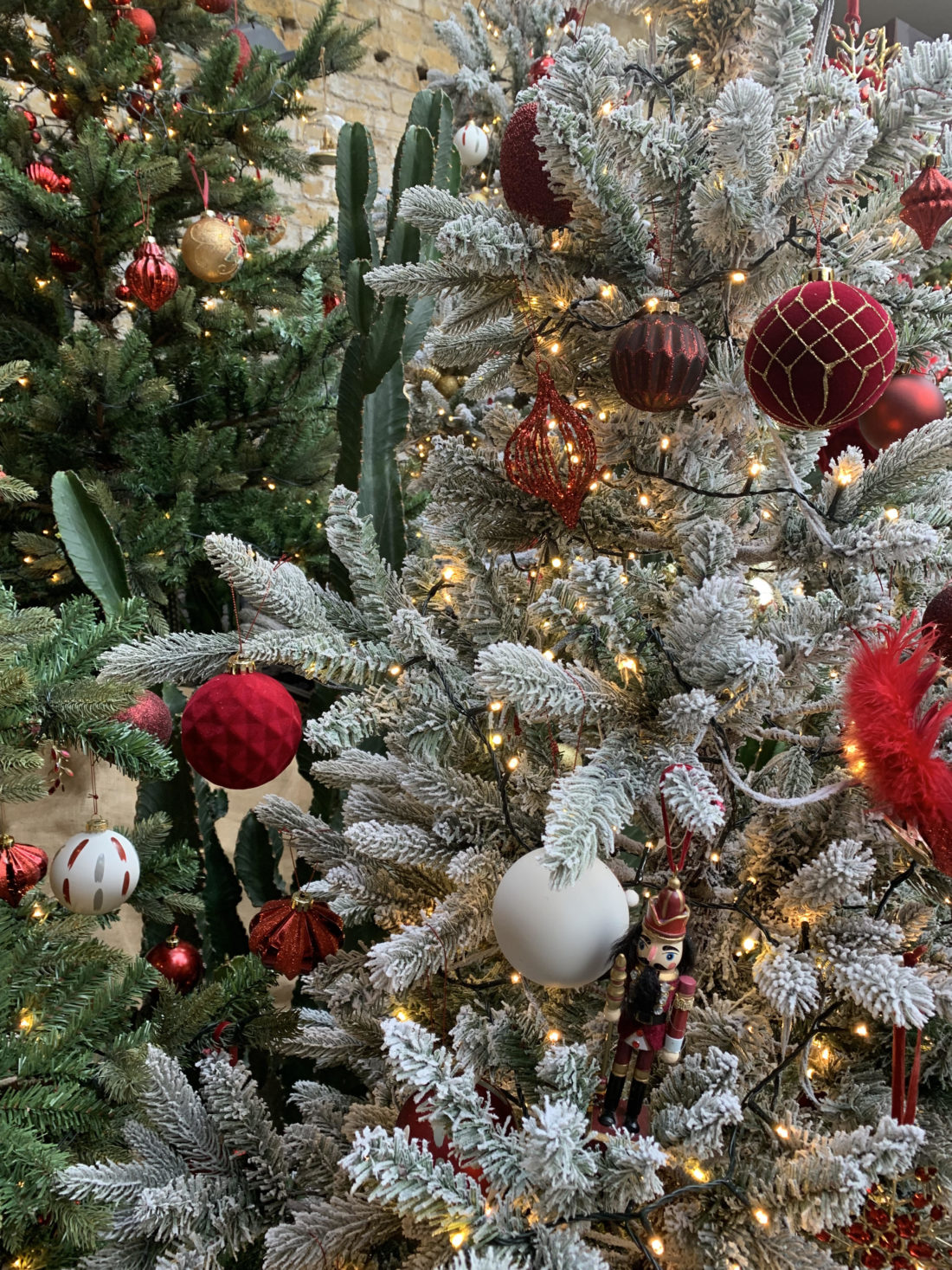 [event/samples/affiliate/ad] I thought I’d just give you a quick show around of the M&S Christmas Event which I went to on Wednesday. I really am not going to many events at all but it’s always such a positive experience. If you’ve ever wondered what happens at a press event, I can show you now.

For a brand with multiple departments, there are dressed rooms so you see the products in situ as they might look at home – much the same as displays in store. I mean, nobody expects your bedroom to be turned into a scene from Narnia but the dressers tend to put as much idea inspiration as possible so you can pick out elements to show your audiences. This is a private house in central London whose architect owners rent out for events. There’s a perspex walkway from one side to the other and it only occurred to me today that you probably wouldn’t want to be wearing a skirt for that – especially as the dining table is just beneath!

Behind the bedroom is the bathroom complete with sunken bath. I know it’s very glamorous but it’s an accident waiting to happen! I do not know how I feel about having my head at floor level (looking at the dust probably) while starkers in water. Imagine one wine too many and a 1am trip to the loo….

I did kind of fall in love with this gold sequinned dress – something about the hang of it from the wardrobe door. I don’t know how anyone is feeling about going out-out for Christmas jollies but I don’t think there is a dress more guaranteed to make you feel beautiful than this. It’s so soft for a start – no scratchiness – and thank you to who ever designed it for the sleeves! A dress like this suits almost all shapes but doesn’t look nearly as nice on the M&S website as it does in real life. It’s HERE for £69 in sizes 8 – 24 with a regular and long option. On the site it looks almost completely silver and yet in real life it almost completely gold but more of a white-gold than a gilt gold. Just lovely.

I also spotted in the wardrobe this 3/4 ruche sleeve velvet blazer which is a very wearable thing for me (more so than the dress) and I’m strongly tempted. It’s just going to go with whatever you need it to – including jeans (just add white shirt, gold bracelets) but there are velvet trouser options too – some tailored and some drapey. I’ve been half-looking for a velvet jacket that’s also casual (I don’t want to look like Mrs Bond) and the loose cut of it is ticking that box. I think it’s great value at £69 HERE.

Next up, the Percy Pig Grotto! It looks like M&S are going BIG on Percy this year – Percy onesies, Percy Slippers, Percy Cushions and Percy advent calendars to name just a very few of the Percy options! I spoke with one of the PRs there about my theory that shopping early isn’t necessary but she said that M&S have seen a big rise in sales compared to this time last year, particularly around food. So, people are shopping now and not hanging on for any potential bargains later. Their ad campaign has literally just started (we weren’t allowed to photograph or film the preview clips) but as soon as that gets going in earnest, I think they’ll be swamped.

I’ve already seen these letter lights in store but they somehow spring to life in a ‘home’ environment – I’d genuinely decided not to get any and now I am sure I will (an L and an M probably for Lucy and Max who despite being fully grown adults, still like a stocking! that said… my mum still does one for me, my sister and brother so it seems to be a contract with no clear end!).  I like them for gifting too – They’re £12.50 each HERE.

I’ll finish off with the food and drink – I’ve already bought two of the light up snow globe gins liqueurs as gifts (let’s see if they actually make it to their destination) in Spiced Plum and Clementine. It’s just one of those ‘why wouldn’t you want light up gin?’ situations for which I have no reasonable answer. I’ve got a flower-fanatic friend who is glugging her way through hers now so she can make a light-up flower arrangement in the bottle for the Christmas table. She says. You can even buy them in a set of a dozen which is a very easy way to get the gifting done! It’s HERE for £120.

I nearly forgot to mention the beauty – there really wasn’t a lot of it this year when in the past it has been a big part of the Christmas event (don’t forget the advent calendar which has recently launched). I got a candle in my take-away bag and a hand cream (and for transparency, a Christmas bauble and a beanie hat) but it was under-represented really (as was lingerie of which there is usually rack after rack). Taking into account that it was a scaled back event for obvious reasons, it had all the fun and jollity as usual but less actual products. The benefit for brands putting on events like this is because you do see things with new eyes and if you have pages, digital or otherwise, to fill, you get so many ideas from it which is very useful indeed for content creation.

Finally, table-scaping! A huge (seats 20 I reckon, easily) dining table in the venue gave M&S ample room to show all of their table-scape products as well as more food. I didn’t really focus on the food aspect, but it’s usual for there to be sign saying don’t eat any of the food from the table but help yourself to any of the food from other points. That’s because it’s a display and may well have been prepared the day before and sat overnight (think ham, turkey, sausages, etc). They actively DO want you to try the food so guide you to the stuff that is actually edible – think of all the food writers or publications with food sections – I can’t believe I left without even tasting a mince pie!