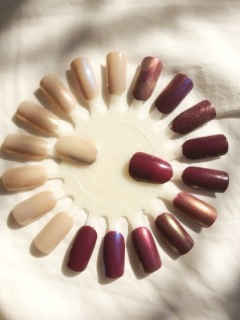 I am so happy to write this post – ages and ages ago, I went for a manicure and a catch up with Marian and we had a misunderstanding in the conversation where she thought I already knew about her collaboration with MAC, when I didn’t. So inadvertently the secret was spilled and I was practically bouncing off my seat with excitement. Obviously, I was totally sworn to secrecy (which is somewhat different to an embargo, when contracts, etc, are at stake).

I have followed Marian’s work for such a long time – she’s one of  very few artists in nails or beauty whose work I actively seek out to look at. Over the years, we’ve got to know each other a bit, and one of the pleasures of a blog is that you get the opportunity to tell others what people are really like – in a nutshell, she is just lovely; funny, down to earth and approachable. She’s manicured the famous; male and female, she’s always in demand to create looks for all the major fashion shows, and she’s a dog lover.. that seals the deal! And she works so hard; Marian has been a name in nails for a very long time and mentored and trained so many young nail artists, so a collaboration of this magnitude has been far too long in coming, but so well worth the wait. When good things happen to good people, it’s a celebration!

I’ve got Marian’s working nail wheels as pictures which are more interesting to me than any promo pics, and I’ll explain the range as best I can (because I haven’t seen them in the flesh yet).

So, the main line is the Nail Transformations that launch in June/July (tbc); a range of six polishes that can be used alone, but transform colours when used over any other shades. There is also a texturiser with a leather finish which means you can add a tactile top coat to any colour. There’s a Highlighter that makes colours pop and takes them up a couple of shades (or when used alone makes nude nails flash blue in certain lights). Shader takes any colour down a shade or two, and then there are three Liquid Pigments in Green Opal, Pink Opal and Gold Opal which transform any shades – and often never in the same way twice. The overall theme looks ethereal and galactical.

Then we have six fall collection colours for August, collectively known as A Model Romance; six black dipped shades to take them “off” colour, but this time they come with 3D special effects..so they’re not shimmers, they’re creams with depth. I think from the sneaky peek pics that you can see how exciting the Marian Newman Transformations For MAC looks. July seems a long way off!