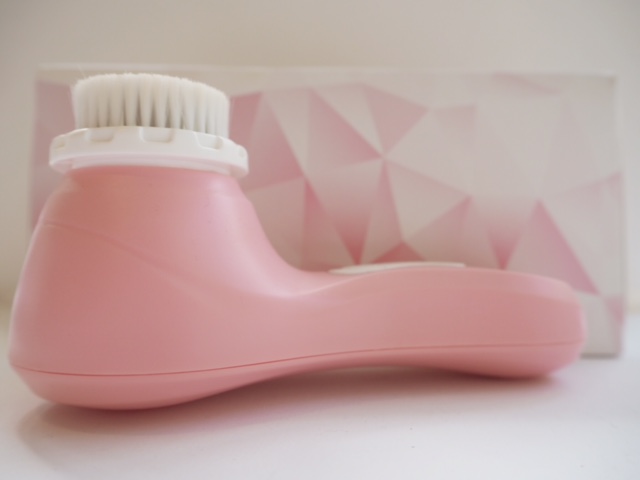 If you’ve ever used a cleansing device then you’ll know that it out-performs manual cleansing every single time, especially if you can be, er, a bit of lazy cleanser like me! My cleansing routine can vary wildly – I can do a full-on double cleanse, a quick swipe with a micellar, a half-hearted cream cleanse or even – please don’t judge – a wipe. It has been known.

The Magnitone cleansing system isn’t new to me – I’ve used it many times (from 2014) as I have the Magnitone Pulsar, so I was intrigued to try out their newest innovation, the Magnitone London Barefaced Cleansing Brush. If you don’t know Magnitone, they use a sonic vibration system that combines electromagnetic vibrations and sonic oscillations; it sounds terribly technical, but actually all you need to know is what it does for your skin. I certainly haven’t done deep research on electromagnetic vibrations because I have visions of ending up on the Hadron Collider website and then crying a bit, but in rough terms, it sends rapid vibrations to the skin at a rate of 15,000 per minute.

You would think that this speed might feel a bit like drilling your face – not at all! It’s genuinely a very gentle feeling, and obviously completely harmless, but because of the rapidity, dead skin cells are gone in moments, pores are cleansed and there is no feeling like it if you’re a cleansing buff. If I was asked to translate how using the Magnitone London Barefaced Cleansing Brush actually looks on the skin, it’s immediately brighter, without a doubt. I use mine with a wash off cleanser mainly, but have experimented with oil cleansers. The only downside to an oil cleanser is that the brush then takes a bit more cleaning.

On the technical side, you can choose from the options (cleanse or PulseLift) and there’s a timer that tells you when 20 seconds is up and it’s time to focus on a different area (i.e. T-zone, cheeks or neck). The PulseLift option adds in a toning element – it feels more ‘juddery’ than the smooth cleanse action, but my skin felt invigorated afterwards, so I’d use that again. You can recharge the Magnitone London Barefaced Cleansing Brush on any USB charger.

One of the words that Magnitone uses is ‘energising’ and that’s a good way to describe how your skin and face feels after using the device. After using the PulseLift option, that feeling of skin having been massaged stays for quite a while.

All you need to do post cleanse or tone is to add your favourite moisturiser or skin oil – the theory is that after all the dead skin cells have gone, your complexion will be more receptive to anything that you use afterwards. Sponsored or not, I genuinely feel confident in saying that skin looks and feels better using this device than with manual cleansing only. There is no doubt in my mind.

So, the facts. The Magnitone London Barefaced Vibra-Sonic Daily Cleansing Brush (don’t try saying this after gin) is £70, which I think is very well priced against other devices, and launches today HERE.

*Product is provided by and post is sponsored by Magnitone London.