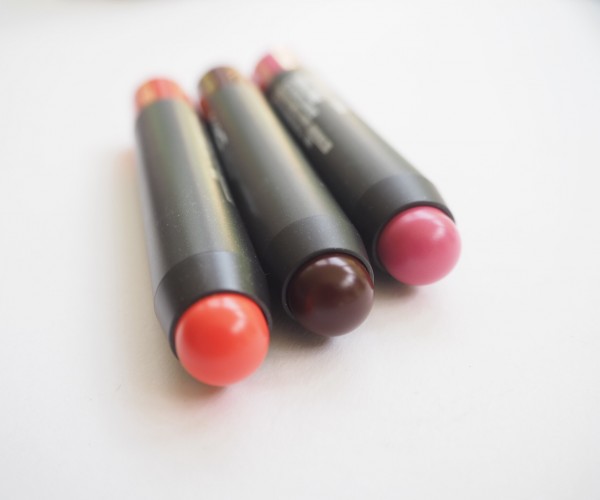 When MAC Patent Polish Lip Pencil arrived as a limited edition, it flew out. It’s a high gloss lip pencil..feels like a lip sheen, looks like a gloss, smells like a cupcake. It’s now back permanently. I feel like I need to take a degree in MAC – it’s so hard to keep up with the changes. When I first started blogging and meeting other bloggers, my jaw was literally dropping at how much knowledge they all had about the brand. I was asked – on more than one occasion – ‘what are you in MAC?’ and I didn’t even understand the question! It referred to my foundation shade in MAC’s signature letter and number code and to this day a common question is, “I am NC11 in MAC, so what would I be in Clinique?” or similar. Which is kind of like asking how many blueberries make an apple. But, whatever you might think about MAC – and I’m very far from loving everything they do – they’re getting it right more often than they’re getting it wrong these days.

These pencils are a good case in point. MAC Patent Polish Lip Pencil follows a familiar theme as far as reinventing the lipstick goes, but put simply, they’ve done it better than anyone else.

The pay off is lush, glossy and doesn’t disappear at the first sip of a crisp white wine. The colours are vibrant and juicy, the wear is good – there is just nothing not to like here (other than the vanilla scent, but that’s a personal preference – it’s catnip to many). They launched on the 2nd of July in a 14 strong line up for £17.50 each HERE.

The shades that I have swatched up from bottom to top are: Teen Dream, Sultana and Fearless… I’m currently wearing Fearless and love it as a milky bright pink.