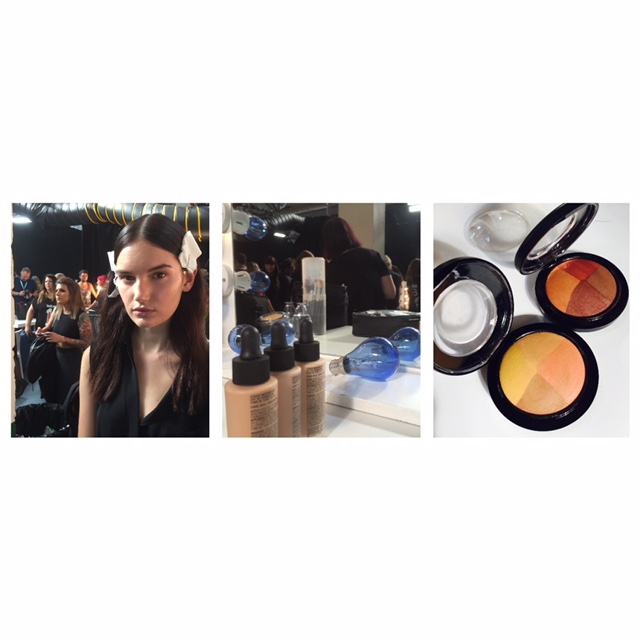 I promise there is a model in there somewhere! I’ve spent the afternoon with MAC backstage at Jean Pierre Braganza mainly drooling over all the cool new products being trialled. MAC really do remember their professional roots and trial products out before they go into production to get feed back from the MAC artists. Most of what they were using on the models this time is product waiting to go into full production for next year, but a few bits and pieces are truly on trial.

So, these are super hasty pictures taken while trying a) not be in the way and b) getting out of the way! I think that this is the most interesting product – I’m a bit obsessed with it already actually, and although it has no official title yet, it’s pretty much different colour versions of Strobe. In the bottom left picture you can see a swatch of the red infused illuminating cream, but there’s also a silver, a peach and gold. I actually cannot stop thinking about the red. The feedback from artists is that they want all of them to go into production, but at this stage the intention is to bring only one! Argh.. how can you choose. This is almost a MAC petition waiting to happen!

Lots of brights are scheduled for February with the MAC Retro Matte Liquid Lipsticks – they’re ultra bright and ultra matte so if you love that flat lip look, you’ll be able to get these over the other side of the year.

Next up are the MAC Foiled Shadows scheduled for spring, which now, obviously, can’t come soon enough! They’re soft, burnished shadows that radiate light – the more you buff them, the more gleam you’ll get. Lesley from MAC described them as a liquid shadow look; eye gloss without the sticky bits. At the moment, their working names are Enchanted Forest (top, first swatch pic), Joy Toy and Fly By Twilight. However, at this early stage, they’re working titles only so it could change.

I love Cushion Foundations so I did almost hyperventilate when I saw this – it’s currently scheduled for Spring 2016 and that’s the nearest I can get. I didn’t swatch it because it was being used and didn’t want some poor model having foundation applied after I’ve dipped my fingers in it! However, the make up artists all commented on its light texture.

Actually, behind the scenes was quite calm this time around. Sometimes it’s so frentic that you can’t move and if you can imagine the heat coming off all those lights – it’s boiling and uncomfortable for everyone. But, the make up look that MAC created for Jean Pierre Braganza was quite pared back – very natural looking, almost an un-natural natural; ghostly in a way. When I saw the clothes though, it made more sense; lots of red,grey,  black, white, vibrant blues and asymmetric cuts that were edgy and understated. Just like the make-up!

So, that’s all I’m doing for London Fashion Week this year – I saw several people I knew scurrying from show to show and just thought, thank god this time, it’s not me! I love to see the MAC artists actually working with new products and putting them through their paces – it seems more special somehow than when they’re all neat and tidy in a packet at counter. I’ve done a couple of Periscopes that give you a ‘live’ look at behind the scenes and the make up (look out for the Boy Brow Crayons) and you can find me on the App @britbeautyblog.