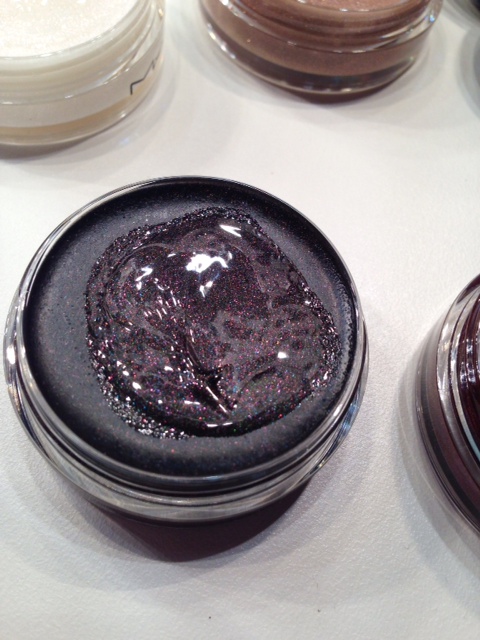 I heard about the possibility of MAC Eyegloss at the beginning of this year and I’ve been obsessd with idea ever since. So, discovering that they’re a reality now was a total thrill.

Medoc is a rich, rich red shade – I can’t imagine a more dramatic eye than this. Slightly Tauped is the gentlest shade with soft irridescent sparkles in the mix, while Pearl Varnish is a strong white, again with irridescent shimmers. The black shade (Noticably .. something!) has red shimmer to it and it’s not an exact black, more a deep blackberry shade with notes of purple in the mix.

Look at the gleam on those! Texture wise, of course, they don’t feel like a texture that should go on the eye, but they’re thick – thicker than a lipgloss would be so that they adere to the lids correctly. I imagine on the eye they’re going to feel pretty strange but it’s such a strong look, there will have to be a little pain for the ultimate gain! You’re probably not going to be wearing these at all unless you’re prepared to take some make-up risks.

So many have tried and failed at the concept of an eye gloss – I didn’t have a chance to get it on my lids – there are hardly any of these in production at the moment; only the MAC artists have them, and even then they’re in pretty short supply. I’m hoping we get to see them on some backstage looks; keep your eyes peeled!