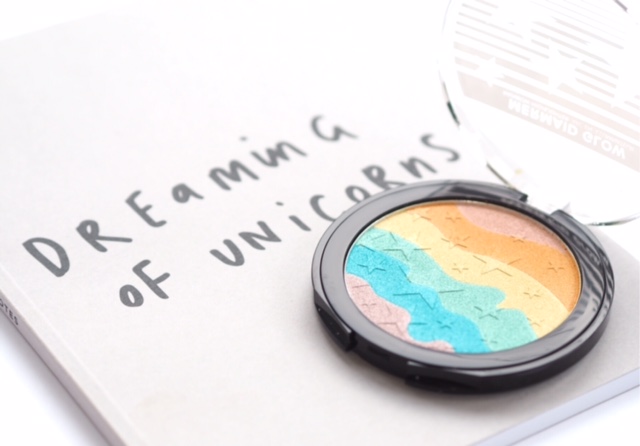 Ohhh! You can see the way spring 2017 is looking for Lottie London – bye bye unicorns, hello mermaids! The brand has a huge drop happening in January 2017 but I’m starting with a very quick review of the Lottie London Mermaid Glow Highlighter to give you a flavour of things to come. I’ll start by saying that I’ve seen rainbow highlighters done better – it’s not quite as high on sheen as some I’ve seen but you can pick out your shades in this (carefully!) and it runs through from a low key lilac to a peachy sheen with waves of yellow, blue and green in between.

They’re not the smoothest finish I’ve seen but you have to remember that this is supposed to be swirled with a brush for an overall effect – it’s not really meant to be individually swatched so it’s no surprise. Other rainbow palettes I’ve seen could easily be transferred to eyes as well, but I’m not so sure about this. The overall finished swirl effect is a sheeny iridescent glow but it definitely has a blue-ish cast, so you have to want that particular mermaid-skin look. It’s fun – I don’t have a price for it yet but Lottie isn’t an expensive brand and I think it’s going to sell really well because it’s on the wave of this rainbow trend.