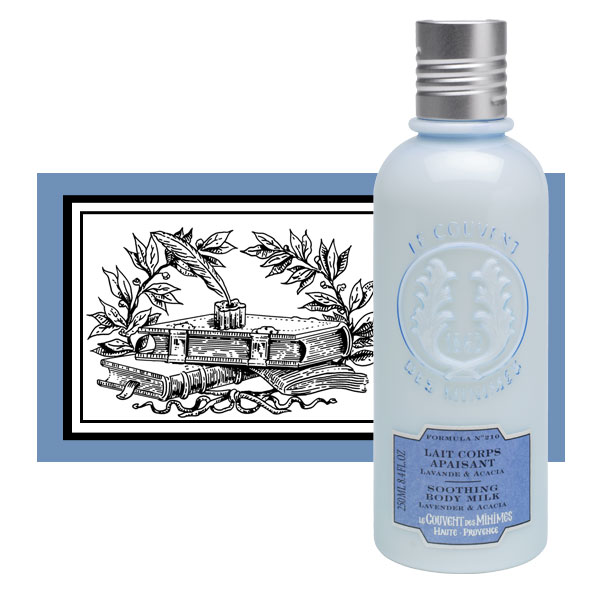 A new brand alert! Le Couvent des Minimes is the little known (in the UK) sister brand to L’Occitane and Melvita – if you look at the packaging, you can definitely see L’Occitane in terms of style. You are going to hear such a lot about this brand in the coming months – interestingly, it’s going into Boots, which at first I thought was a bad idea, but the more I see of the range, the more I think it’s a good idea that this brand has high accessibility.

There’s a lovely back story to the range as well; the brand is named for the Minim Brothers, 17th Century monks who inhabited a convent (are they confused or am I, because I thought it would have to be a monastary?) in the South of France and built vast terraced gardens to provide food and remedies to the surrounding community. During the French revolution, the monks had to leave and it wasn’t until 1909 that a community of Franciscan Missionaries of Mary made the convent their home. Cultivating the land, establishing beehives and farming, they also helped the poor by providing eduction and activies.

Nowadays, Le Couvent des Minimes is a luxury spa (the nuns got too old to be able to continue and there weren’t enough replacements) but the products all reference the surrounding land and natural botanic growth. I have tried the Eau de Cologne above – Eau des Minimes Cologne – it’s got none of the associated alcohol backdrop, but is full of ripe lemon notes and it’s easily the nicest Eau des Cologne that I’ve ever tried.

We’re kicking off with the body products – they’re very mid-price – later in the year, but it looks like it’s going to fill a gaping hole in the gifting slot for gorgeous, stylish and affordable bath and body products. Hurry up, Le Couvent des Minimes!