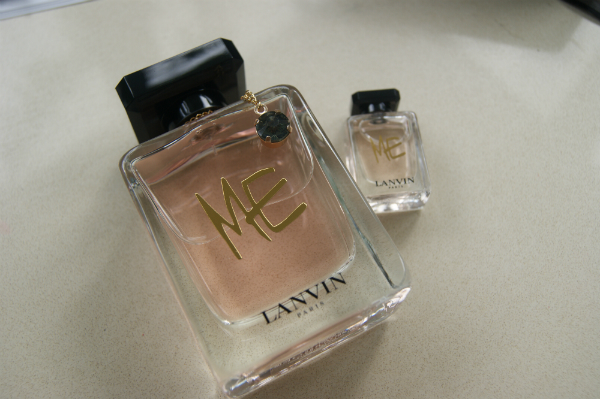 I could get almost sentimental at the sight of baby next to mamma! This is the forthcoming ME fragrance from Lanvin, designed by Alber Elbaz.

I think I’ve mentioned in the past that French press releases are a whole other genre of writing. The PRs will kill me I know but you have to read this:

“Stop, enough, let me vibrate, catch fire, love, captivate, become the woman I really am – a slipstream of energy that not many can follow, but one who also dreams of tranquil pleasures.”

And from this we are to get the measure of the fragrance. It’s pretty much always the same variation on this theme (strong woman with fierce yet feminine side) but just so you know, four pages later in the same realms of fantasy as above, we eventually get to what it smells like.  So, translated from FPR (French Press Release) we have actually a rather beautiful fragrance and IF ONLY fragrances could make you feel as described above… but it’s a very sophisticated and elegant scent. Floral but quite light and at the same time, warm on the skin, so you want to keep smelling it. There are fruit down-notes – most notably blueberry, which gives it a sweet edge.

Lanvin ME is in Harvey Nichols exclusively from 4th August and nationwide from 2nd September from £33. I love the bottle (the jewel symbolic of fashion and emotion) which is definitely dressing-table worthy in its decorative style. It’s more than worth a spritz if anyone attempts to ME bomb you in store. Let them.