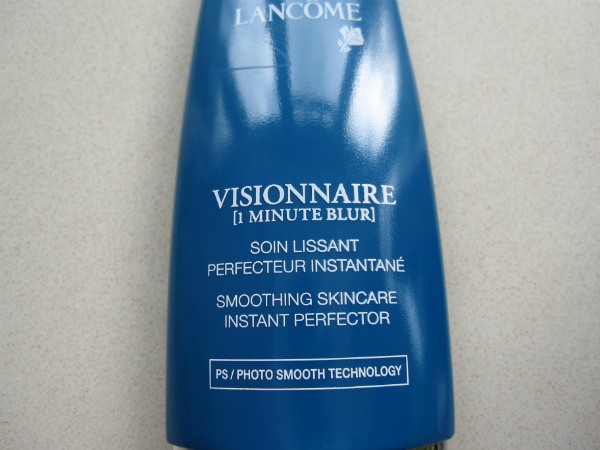 I’ve had several goes at this – I really don’t like these line-blurring products because they fall so far short of expectation usually – but this one I think is the most effective that I’ve tried so far. The feel of it is slippy and silicone-y – and the texture is its biggest problem because once on your face it looks shiny unless you use the tiniest amount and then it doesn’t really work. I am sure there is a mid-point that I haven’t found yet, but that said, it definitely does reduce the look of pores.

I tried it under my eyes – it doesn’t really get rid of or blur lines, but I also tried it on my chin where I have some pores that are slightly bigger than they used to be and for that, it was very effective. As an over-all smoother, it does work – but the effect is short-term and at £40 I’m not sure you would be all that thrilled with it.

Of all the claims the first is where Lancome Visionnaire 1 Minute Blur does work; I think blurring the look of skin texture irregularities could mean anything – including pores so I’m not sure that is a viable claim. Smoothing the look of uneven skin tone.. well, that’s pretty much the same thing as well! Working to smooth skin appearance, yes, you could say it does that, and no to more radiant skin.