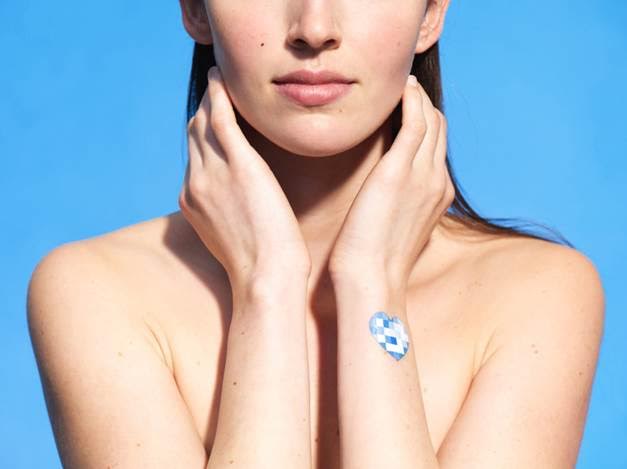 Oh hang on! All the fuss around the new La Roche Posay Wearable UV Patch, unveiled in Las Vegas today, sounds completely marvellous, until you realise that the dye sensor driven patch needs to be used with a mobile phone. Yes, you need the app.

The chances are that the places you are most likely to be concerned about excess sun exposure are the beach and the pool, or in a much sunnier place than you’d normally be. You would expect, I think, to be slathered in sun screen. So who exactly wants to get out their phone to check the app on sandy beach or by a wet pool with super slippy hands covered in SPF50?

In theory, UV patches are an awesome idea – something that gives you a direct indicator that you have had enough sun and need to take in some shade. Us Brits are notorious for being the lobsters on the beach – we don’t get nearly enough sun in the UK so when we find it we literally do bathe in it, often without thinking through the consequences, while we strip off to our bikinis.

Whether you’re a tanner or a non-tanner, nobody needs a big heart shaped white patch on their chest or arm, so unless you can tan through it, or you’re heavily into the reverse tan line trend, that’s a major flaw. It does, apparently, adhere over sunscreen, and stays on in the sea or pool.

Anyway, good luck with your slippy phones by the pool while you obsessively check your app when this launches later this year. This is a really simple, really good idea over-complicated by needing an app to go with it. You could just follow the usual UV rules and stay out of the sun during the middle of the day, cover up or use high SPF. None of those need an app – or even a phone. The one single plus is that it’s free. As is, er, staying out of the sun.