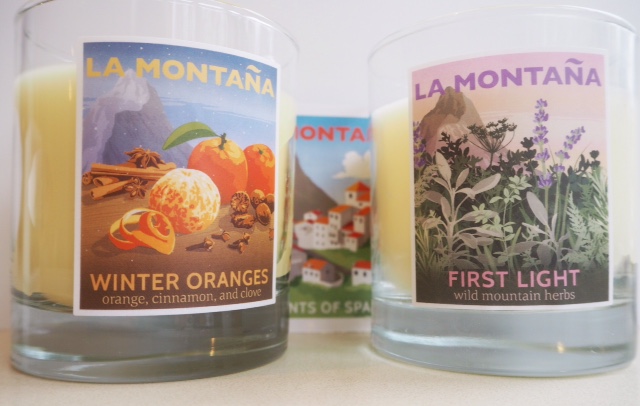 This pair of La Montana candles arrived just before Christmas when I was a bit candled-out, so it’s taken me until now to have a proper look at them. I have to say, I like what I see. The back story is an engaging one – founders Cassandra and Jonathan Hall moved from London to a mountainside in Spain in 2011 and have taken their inspiration from their surroundings – bottling the scent of the wild vegetation in their surroundings.

I particularly like First Light – especially when I know it’s inspired by a dewy, green dawn, when Jonathan and Cassandra get up to let their dogs out, and that air – I think we all know that smell of the first early morning of a holiday – it’s something special – a kind of unfamiliar freshness before the heat kicks in. First Light is the signature blend of La Montana; wild fennel, oranges, rockrose and pepper which add up to a green scent with sweetness and a peppery kick.

Winter Oranges – my nose has missed the boat on this one – the addition of cinnamon and cloves makes it too much a Christmassy scent for January, personally speaking, but it’s not so dosed in festive references that you couldn’t enjoy this citrus flash in front of a cosy fire.As the owners put it, “it doesn’t smell of mince pies” but references the Valencian orange harvest which takes place in winter.

I really hope that La Montana has plans for some bath oils or similar – I would dive headlong into a bath filled with First Light – but as an entry into the candle arena, I think it’s strong, although a little bit pricy at £35 each (although postage is free which lessens the sting). You can find La Montana HERE .