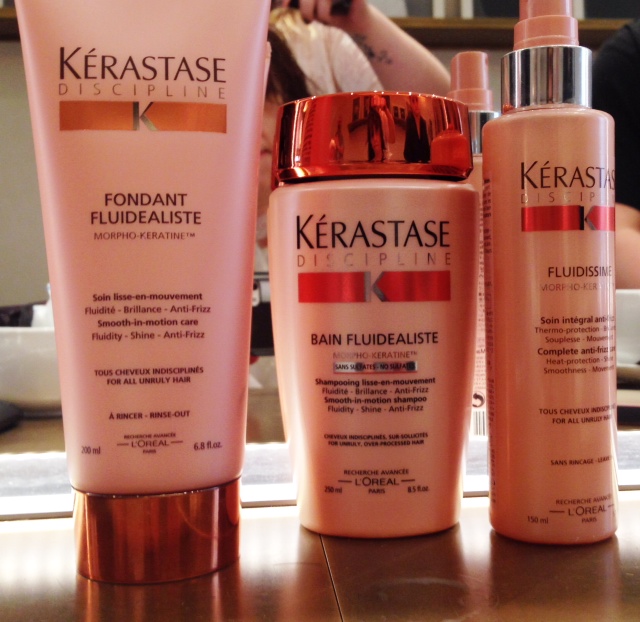 If you’re a regular visitor to BBB, you’ll know I hate going to the hairdresser as much as other people hate going to the dentist. In the past couple of years, this has been hugely eased by Aveda in Covent Garden and the wonderful Zak.

But, sometimes I have to try other things and so I ended up a few days ago at Hershesons in Conduit Street, London, to have the Kerastase Discipline treatment. So, two things, here. First up, I thought that you could easily do the ‘treatment’ at home if you have the products because it only uses what is already available to buy (three products so far in the range). But, it’s fiddly, so while yes, in theory you could do it, you probably wouldn’t want to. The treatment involves a double shampoo, followed by the intensive conditioner being carefully applied and then blow dried while it’s still in your hair. It’s a rough dry but takes ages which is why I think your will would break (never mind your arm). That is then washed out (it comes out really easily) and the serum applied before the full blow dry. Kerastse reckon that this will keep you frizz free for a couple of weeks so it’s a good pre-holiday or special event. However, I’d have to point out that for less than the cost of the treatment (£50-£60) you could buy the products and if you have a strong arm and plenty of patience, it could be done at home.

With the weather against all kinds of hair treatments (that tropical, wet, humidity that occasionally hits London) I would have to say that on day one, there was zero frizz. Day two, there was frizz. It’s unfortunate that the weather set to High Frizzibility but what I did notice was that it was exceptionally easy to quickly blow dry it down again. It’s day three now and there was frizz, but again, once blown out, it hasn’t come back. I’ve been using Kerastase Discipline at home for about three weeks.. I think it has overall made a difference in relaxing out day to day frizz.

The second thing about this review is that I have had literally the blow dry of my life. To the point that someone actually pointed out at my following meeting that it was the best blow dry they’d ever seen. I also managed to have a sneaky little trim and it’s just transformative! Sarah Louise Okin is Senior Stylist at Hershesons and understands hair in a way I haven’t come across before. It’s intuitive and it shows. She instantly asked if she could do something with my fringe. “You seem like a really cool person so I want your fringe to be as cool as you.” So, because I don’t think I have ever been called cool in my whole life, I am instantly besotted with her! She cut away some of the sides of the hair surrounding the fringe so that it’s no longer a blunt fringe but instead falls around the sides of my face very naturally (and perfect for those enviable little trails that some people naturally have when they put their hair up). It was a series of simple snips that have made a world of difference.

She also did some very nifty scissoring along the ends of my hair so it’s kind of jaggy, but in a good way. Sarah Louise then did the fastest and best blow dry ever. If it was ten minutes, I’d be surprised. I don’t know how to describe someone that just intuitively knows what to do with hair. Like, she didn’t really ask me what I wanted, she just kind of knew what I needed. I think a find like this is worth its weight in gold and now I finally know why women follow their hairdressers to the ends of the earth.

I don’t really have a high enough recommend for Sarah Louise. I checked out her prices for a cut and blow dry – it’s £110. I never thought I’d say it, but worth every last penny.