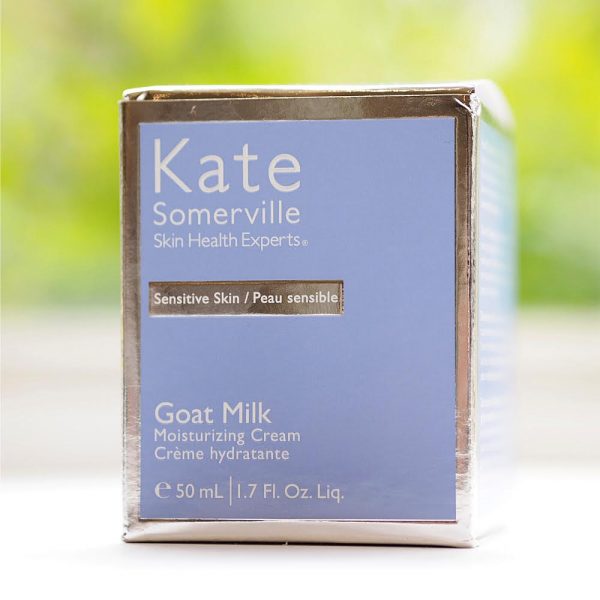 While this brand was available in about 2012 in very select branches of SpaceNK, it disappeared until it was bought by Unilever and brought back. Actually, the entire range is returning in dribs and drabs but the better news is that the famously good Goat Milk Moisturizing Cream is now available.

Of all the products we had to rely on madly stocking up while in the USA or badgering friends and relatives to get re-supplies, this moisturizer was one of the most wanted. I remember coming across Kate Somerville in New York and being really excited about it at first glance. The sales assistant told me on that day it was coming over to the UK and in due course, it did.

So, what’s great about Goat Milk Moisturizer? Much of its appeal is that it contains lactic acids which will leave your skin so much smoother by gently exfoliating than hydrating products that don’t contain it. Now, it used to be indicated for problem skin as well as sensitive skin and I notice that the former claim has gone as has Black Willow Bark (aka salicylic acid) as in ingredient. Instead, there is a small amount of witch hazel and antiseptic rosemary so if you  have problematic skin over and above sensitivities, you may find it suits your skin well. Actually, there are quite a few ingredient changes but it’s high in fatty acids and omegas (avocado oil, coconut, sunflower) and quite frankly, a bit of a treat. I’m not that keen on the airless pump – I see the advantages but the disadvantages are that you won’t know if you’re nearly out and have no chance to scrape the very last drops out of the pot.