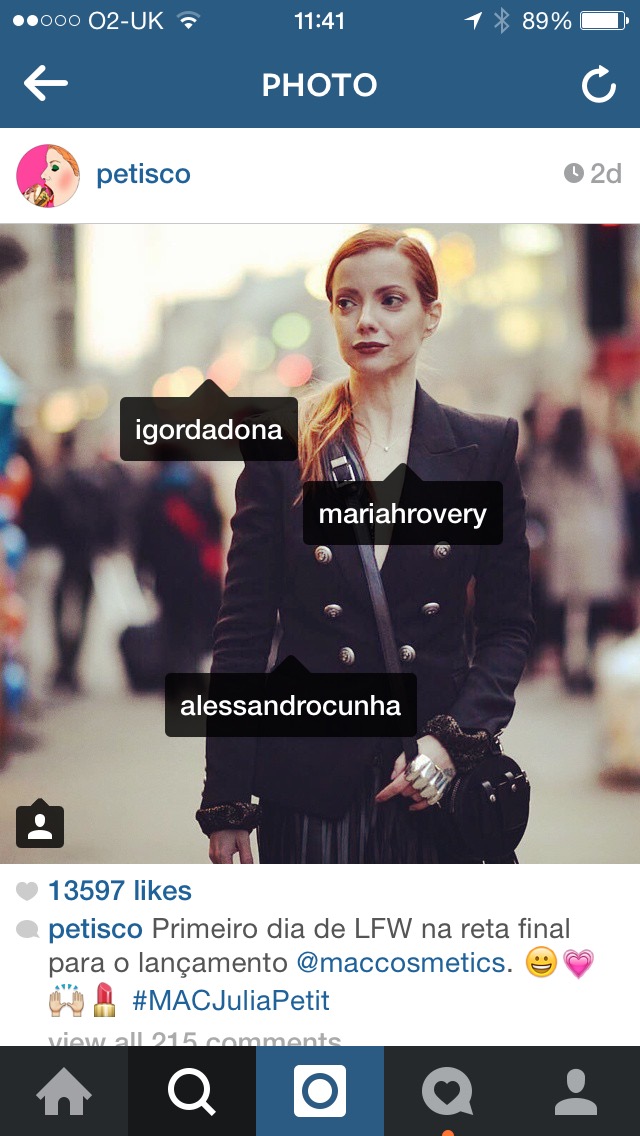 You’ll be sick of the words ‘backstage at MAC’ before I’ve finished (I promise this is the last post on the subject), because I’m just going to pretend LFW is not happening from now!

I’m going back to a range that I showed you last week…the Julia Petit collection for MAC. After the show on Friday, I managed to grab some time and some tea with her. I’ve been impressed with her range since I first saw it and it’s a big deal for bloggers because this is MAC’s first proper collaboration with a blogger.

So, Julia is based in Brazil, and I guess you’d say that her site, Petiscos, is a mix of fashion, beauty and lifestyle. It’s also quite special in that she started blogging right at the beginning of the trend so has developed it into a business and a brand in its own right. It’s gone well beyond the norms of blogging, to be honest.

Her background is in advertising, so she truly took a leap of faith to give that up. Right from the very beginning, she monetized the site. When I think back to how blogging developed in the UK, back in the day, we just never thought to monetize. In fact, we went through agonies over whether it was even ethical to do so. Julia’s wisest move was to be clear right from the get-go. I think an advertising background really helped here, because she knew exactly what brands were looking for and knew how to provide it. But, like us, she didn’t know where it could lead.

Fast forward to today and Julia Petit and Petiscos is more of an empire than a blog. Her attitude is to be positive and supportive, she questions things, brings in other writers for opinion pieces and keeps things lively and interesting. She is so well known globally that even at London Fashion Week she was stopped by fans for photographs. It kind of makes me realise what a little bubble we live in here when it comes to what other bloggers do globally.

The range with MAC was not only a collaboration between Julia and MAC, but also her readers and MAC. The decision making process throughout was put out to readers who gave their thoughts which were then translated back by Julia Petit to the collection. I said that I could really see the person behind this collection and I can – it’s reflective of the Brazilian woman and the diversity of tones within that header.  All the colours can be worn by all tones. Julia told me that the most daunting thing about creating a MAC range was the sheer level of colour choice available – how do you filter from thousands? Well, she found her way by tapping into the opinion of her audience. She’s also keyed into what it’s like to be living in an urban environment in a tropical climate. If you think we complain about frizz and pollution, spend a week in Rio!

Which then brings me round to saying that Julia’s site is unusual for a blog in today’s terms because it’s not really all about her. It’s about many things and intended to be so. So, while she has risen to fame it’s through consistently good content that people want to read, rather than the ‘me’ thing. For more personal touches, she uses other social channels such as Instagram and YouTube. So, Petiscos can be many things depending on what you want. It’s also a high indicator of how blogs will change in the future – the conversationalist element, where blogs circulate opinion and create talking points, becoming less about the blogger and more about a wider culture in whatever genre – it’s where blogs are moving, globally.

I wondered how she felt about competitors, and she told me she feels quite alone in what she’s doing sometimes, which is something that all bloggers can relate to at some time or another. It’s the human touch in her attitude and her empire that ensures her continuing success.

We’re restricted in the UK by language in discovering global blogs which is a shame really – I find them fascinating, but Julia’s site particularly so because I’ve made the effort to discover more about it (and have met her, which always helps!). Brazil seems to be far more forward in the blogging journey than us or even the US and Julia is very switched on about where it’s all heading. She gives it two years before everything changes again.

The final words we parted on were the ones I found the most inspiring. Julia said don’t worry about Facebook, don’t worry about YouTube or Instagram because none of them are really yours – you’re working almost for them by just being present there – but your blog, that’s what really and truly belongs to you.

I’m genuinely so pleased to have met Julia (I’m looking like a bit of a fan in this pic!), as I would be to discover any global blogger, and discover what similarities and differences we share.