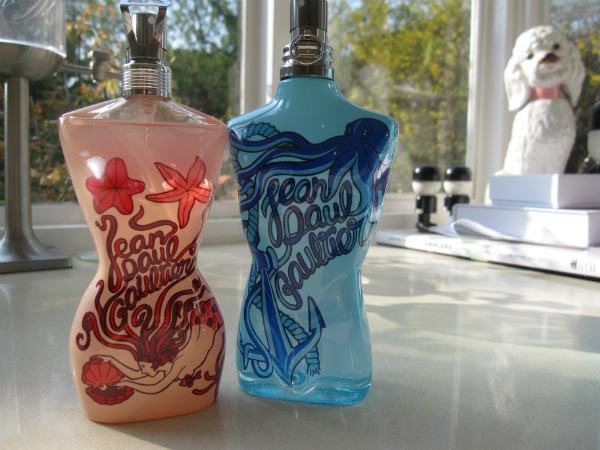 I’m not totally missing the erotic references here in the Jean Paul Gaultier Summer Limited Editions 2014 –  large anchor on lower torso for one (I know, once you’ve seen it….) – but I’m going to be very British and skirt around them in favour of the press release version. I think these are the best bottles I’ve seen in a while from JPG Le Male is anchor, rigging and octopus; Classique is all about the siren, starfish and the shell. Although collectors religiously pick up the limited editions, and I’m a collector of just about anything beauty, I only have one JPG from a few years back when Harrods did a British theme and one of the bottles was dressed in a Union Jack. Although I’ve never used the fragrance, I’m very fond of that bottle.

The fragrances are both the same as last year’s – Classique is rosy and fruity, while Le Male is all lavender and mint with undertones of mush and sandalwood – lovely, actually, and quite understated which I don’t think you would guess from the bottle.

They’re both £40 each – they’re supposed to have launched but I can’t track down a stockist… expect to see them soon.