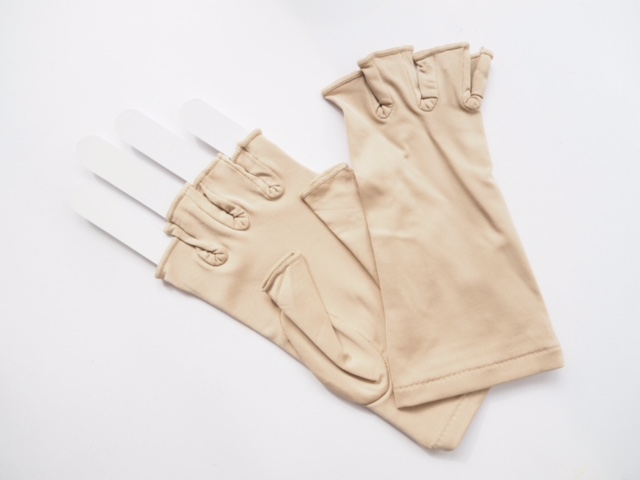 Um. Moving away from the possiblity that the Iluminage Skin Rejuvenating Gloves might make your skin look glorious, let’s just talk about the world’s most unattractive gloves! Why? Why not make them at least look pretty in some way? However, the fact that they’re really, truly not lovely looking is somehow reassuring. I like to think it’s because they’re so science led that the boffins back at the lab only focussed on function and gave no thought to covetability.

The thing is, copper technology IS a thing. And, it’s been run though multiple clinicals that all come out with positive results. The claim from Iluminage (yes, I know I need to start again on the Iluminage hair removal having royally made a mess of it first time around) is that the infusion of copper into the fabric will improve skin tone and texture, promote firming and reduce lines on hands.

The ability to infuse copper oxide into fabric is genuinely groundbreaking and if we can whizz to the future for a moment, imagine if all your clothes, from t-shirts to pjs, came with an anti-ageing infusion that actually worked as standard, it’s quite mind-blowing. If this happens, please don’t let the Iluminage scientists design the fashion range otherwise we’ll be dressed in a sea of beige.

I’m going to add a link that addresses all the technology in an article written by my friends over at Beauty By The Geeks on the copper oxide pillow cases from Iluminage. They really know their stuff as both girls are from science back-grounds and actually do the research rather than take anything at face value. It’s HERE. In fact, it’s only their feature that’s made me far less sceptical than I started out. But the Iluminage Skin Rejuvenating Gloves still won’t win any beauty contests! It’s very easy to trial these.. I’m typing all day long so it won’t make any difference whether I’m wearing them or not so I’ll report back if I see any differences.

They’re scheduled for around June/July time and I don’t yet have a price for them.