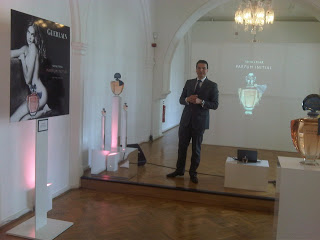 Yesterday I went along to the new fragrance launch from Guerlain; Shalimar Initial. It’s a kind of Shalimar ‘lite’. The original Shalimar was created in 1920 by Jacques Guerlain although didn’t make it to shelves until five years later, and then it was launched exclusively in the States after Raymond Guerlain’s wife caused an olfactory sensation on board the Normandie cruise liner they were holidaying on. Even the ship’s orchestra managed to bang together a tune that they named after the fragrance; Shalimar.

Shalimar is something of a Marmite fragrance – it is so distinctive and spicy that you really have to love that genre of scents to enjoy it. This reworking of the original scent is by Thierry Wasser and is aimed at a younger Shalimar audience, although I would say it is absolutely wearable for any age. It still carries the backdrop of the original fragrance but has been lightened and brightened by rose, powdery iris, vanilla and Tonka bean. Running through the scent is Calabrian bergamot. The fragrance as a whole is described as an ‘amber floral’.

If you always loved the idea of Shalimar but not the execution, you really should check this one out…it’s going to be a biggie. Prices start at £30 for a shower gel, 40ml fragrance is £37. It’s in Selfridges now and nationwide from 1st August.