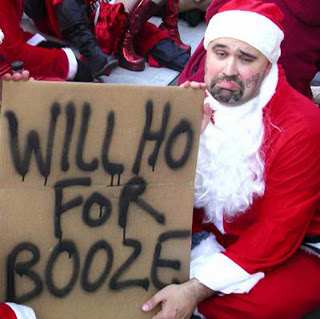 Every year I do a little post on the weirdest of happenings.. the Christmas In July Goodie Bag Blaggers. I am sure – absolutely sure – there is some sort of club whose members try and go to every press launch they can wangle their way into (but aren’t invited to). Last year, it was notoriously a lady from *cough* Conde Naste Traveller Sweden who styled it out all the way through a premium brand make-over with the make-up artist with vague answers about where she worked and what features she was currently working on. Also last year, Mr Lanyard..some very strange bloke who looks more out of place at a beauty launch than a live bear and who wears a Press card on a lanyard and if pressed on where he works, mutters something about a council magazine. Yep, because there is always a lot of beauty in those.

This year, it’s three more elderly gentlemen who arrive with clipboards (for authority, you see) and say they work for some gadgety magazine that actually doesn’t exist. And, while beauty gadgets might appear occasionally in gadget mags, they’re not really the norm. I’ve also spotted another bloke (so many men.. don’t they know they’re going to stick out like a sore thumb?) who quite clearly is blagging it – the reason I know? Without exception, they all ask for champagne to drink, no matter what time of day.

I can guarantee you that there is not one single beauty writer that pitches up to Christmas in July event at 11am and starts asking for champagne. It does not happen – ever. Another massive clue is that they turn up at either breakfast, lunch or tea time.. any likely time where there will be more substantial food than an occasional canape. And they eat like it’s their last meal – if you’re at an event and wondering why canapes are a bit thin on the ground, it’s because the blaggers ate them by the hundred-weight, in between downing as much champagne as they can possibly drink. As if scamming their way to as much free food and drink as they can load up on, they always demand a goodie bag, even if it isn’t offered. Another clue – beauty journos/writers don’t usually mind if they don’t get one as they can call anything they need in later. And if anyone can tell me why three people from one (non-existent) gadget magazine need to pitch up to a beauty launch, I’d love to know.

They are just so glaringly in the wrong place; they don’t make conversation with anyone (in case awkward questions pop up) and they don’t make eye contact. They literally hover where the drink is and when they’re full up, they leave.

These launch blaggers are notorious within every industry I think and it’s so difficult for the poor PRs to host a lovely, relaxing launch to showcase their glamorous products while trying to eject three pensioners who do not want to go quietly.

PRs – add in your warnings anonymously in the comments.