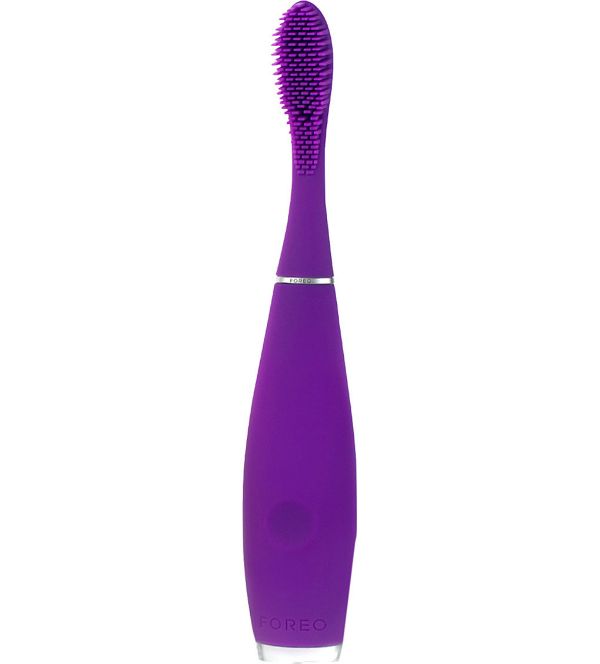 This is a strange one! The Foreo ISSA toothbrush is the world’s first silicone toothbrush. It’s credentials are impeccible – an integrated battery that lasts about 365 uses per full charge, brush heads that last a year and a 2 year warranty. I’ve got a recharger in my box that will charge it up on my laptop – although, that feels a bit strange to me. I kind of want to keep my toothbrush in my bathroom.

The theory of silicone is that it doesn’t harbour bacteria (unlike toothbrushes) because it’s not porous. It buzzes and vibrates a bit like your regular electric toothbrush BUT it feels very different. The first time I used it I felt like I was buzzing my head – I think I probably felt that when I first used a normal electric toothbrush, but because the bristles aren’t pliable like nylon, it’s a more intense feeling. Not horrible – just different. It’s a completely different way to brush – in fact, without the reassuring bristles of a normal brush, it feels like you aren’t doing the job properly. And, it’s more of a pulsing sensation than a buzzing sensation.

But, nonetheless, you are. The Foreo ISSA claims to remove stains and give the ideal amount of friction needed to properly clean them up – my teeth certainly feel super clean after using. I don’t think I’ve used it long enough to give a proper view – so far, so good – and the big sell on this for me is helping to keep them white, plus the fact that it gives your gums a massage while it’s cleaning –   What I genuinely love about it though is the simplicity. Oh, thank goodness for this brush that doesn’t light up if you’re ‘brushing too hard’ and doesn’t have a timer to keep you at the sink for what feels like ever – it does do a rapid pulse thing when it’s time to move the brush around your mouth (no more up and down like we were all taught!) but that doesn’t feel too annoying. It does a pulse thing again when 2 minutes is up, but once again, it’s far less of a brushing bully than the little digital screen gadget that comes with some – it smiles at you when you are brushing correctly and for long enough.  I threw mine away. (A warning..the kids’ version has this!)

If you’re thinking that the Foreo ISSA is going to cost an arm and a leg, you’re absolutely right! But, it’s a bit of an indicator when you can’t find a stockist that’s got any left in stock.. even at £149, they’re flying out of the stores. I found them in stock at mankind.co.uk HERE which then makes me think that it is a bit of a blokey thing. It’s the Jaguar of toothbrushes, making anything else look and feel like a Ford Mondeo.