The Fan Museum at Greenwich and Maison Francis Kurkdjian 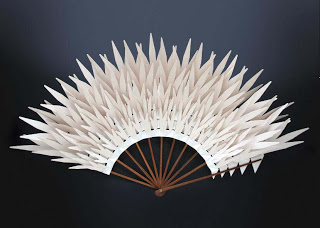 Last night I was at the launch of the Sylvain le Guen exhibition at the Fan Museum in Greenwich. Quite an experience and at times it was like a freaky timewarp into a cross between Dad’s Army and Love In A Cold Climate. On the one hand, a greeter so posh and condescending she could barely spit her words out and on the other, being served drinks (or, as it was, not served drinks) by an elderly gentleman whose rigid system seemed to mean that nobody got a drink. But, anyway…the whole thing was jollied up by the very beautiful owner of the Fan Museum who I reckon to be in her eighties and the very epitome of grace and elegance.

The fans are exquisite and comprise the biggest fan collection in the world with fans dating back from the 11th century set in two grade two listed buildings. And the reason I was there was because Fancis Kurkdjian (he of the expensive scented bubbles and extravagant bubble installations) has created a scented fan for the exhibition in collaboration with Sylvian. Sylvian Le Guen is a rare thing – an artisanal fan maker of which there are very few in the world. If there is a period film needing a fan, Sylvian is your man. But to concentrate on what Francis created.. he used fragrance papers (like the kind you get a squirt of fragrance on at counter) to make a fluttering work of art that takes your breath away. The fragrance strips are, of course, scented, and in this case with his Anniversary crystal edition fragrance. We’ll ignore the fact that it is encased so nobody can smell it. There is actually a silk and leather fan also from Francis that you can smell, and next to it some fragranced paper strips.

The exhibiton runs until 13th November 2011 and it is definitely worth a visit – just mind your Ps & Qs and don’t go thirsty.