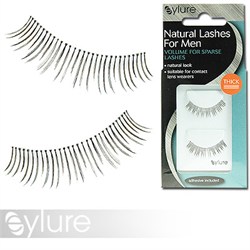 I sat on the train yesterday next to a man whose lashes were so long and curly I had lash-envy for the entire journey. And, they were a real feature of his face… to the point that I could tell you the colour of his skin, all about the most divine lashes I’ve ever seen, but anything else about him such as eye colour, shape of his nose, mouth etc, there’s nothing burned on my brain. And you’ve got to admit that a man with cute lashes is well, extra cute.

So Eylure’s new lashes for men actually might not be as silly as they sound. Except, I can’t help thinking that if I really fell for someone because of their gorgeous lashes.. and they peeled them off at night, I might not be quite so enamoured. It might be a little bit along the lines of not expecting them to take their teeth out.. but then they do. Awkward. Also, I’m not sure exactly who they’re aimed at. I can only imagine Mr BBB’s stunned expression if I bought him a pair and likewise my dad… it’s about a million times too weird to even think hard about that one. What about your boss? A toupee is one thing, but if you suspected him of wearing false lashes, I can’t imagine that’s going to lead to anything other than an outbreak of horrendous office giggling – for weeks. What if your plummer turned up in a pair?


The only place I can really see them is on men who wear make-up anyway and who love an extreme look – personally, I love a bit of guy-liner; I think it looks gorgeous. Oh, and I can imagine the boys of TOWIE having a go at them..also models I guess. But, just don’t really know who else would take them seriously. I’m 100% for anyone expressing themselves through make up and beauty; no issues there at all, whether it is men or women, so I think it’s a question of how you wear them and whether you can actually carry them off within your own style. If you can, go for it!