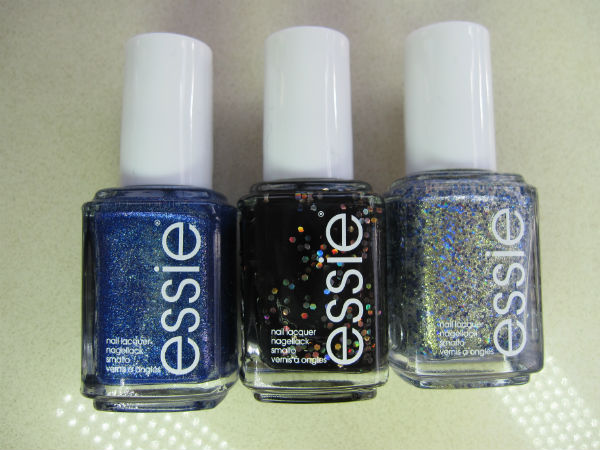 I’ve got three of the new Essie Encrusted Collection to show you – it’s a bit of a mixed bag this time. I love playing about with nail polishes and top coats but I think I am nearly done with the trend, I have to say. Above is Lots of Lux, Belugaria and On A Silver Platter. They’re all quite complex in their composition; but for example, On A Silver Platter is billed as having lavender shimmer – how nice if that were the case, but I can’t detect any lavender in it – only blue, gold and pink holo particles.

Belugaria is awful – it’s like a newly tarmac-ed road with an intense black that dries to what I would say is a rough, concrete finish. The glitter is so overpowered by the black pigment that it barely shows at all – it looks stunning in the bottle, but out of it, doesn’t live up to expectations – I’ve seen it described as a hot mess and that’s just about sums it up.

The one I really like, and unexpectedly really, is Lots of Tux which dries to a matte finish but still sparkles. It’s also holo and really quite a deep finish. There are also three other shades, Peak of Chic – white with rainbow holo, Ignite The Night – a matte finish hematite, and Hors d’Oeuvres in gold with silver based iridescent silver glitter. The collection, with the exception of Belugaria is really pretty if you like a little flash on your nails. It’s launching in February.

I’ve done a quick scoot around the interwebs and Belugaria is looking pretty horrible on all the other swatches – I wondered if I’d done something wrong, but no, it really is that bad ;-). The-glossy.com has some great swatches HERE.