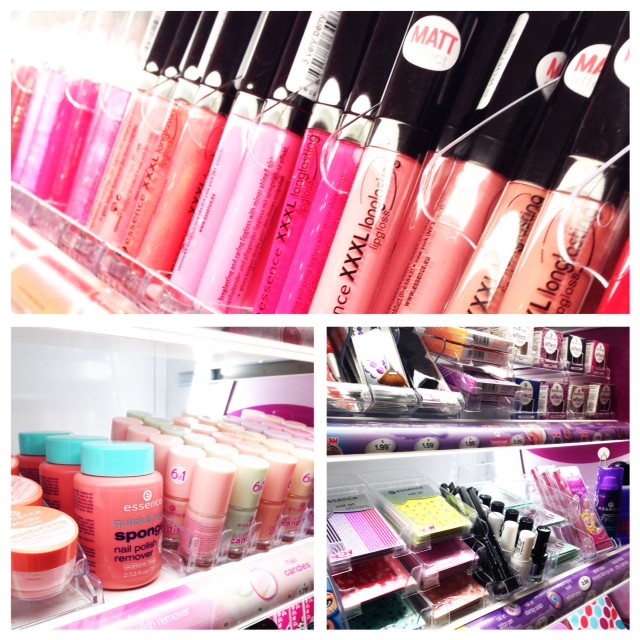 At last! Essence is making it to the UK. I blogged a while ago about this German brand which has limited distribution in Wilco Stores currently, and said I hoped to see it have wider availability. If you don’t know Essence, it’s a budget beauty range that punches above its weight in terms of quality and innovation.

I’ve pulled out a few items that I really like already – namely, Essence Blush Up in Heatwave (£3.49) with an ombre effect, Essence Pro White Glow (£1.99) to brighten up nails, Essence Waterproof Gel Liner (£2.29) (already tested and performing just as well as any other) and the Essence All About Nude Palette (£3.99) with six shimmering nude spectrum shades.

Swatches above of the nude palette and Essence XXL Longlasting Lipgloss in Baby Doll’s Favourite and Silky Red (matte effect). Essence is available in 70 countries worldwide, so the question is, what took you so long? Essence UK has a nice ring to it!

So, the news is that Essence is going to be available in all Wilko Stores in a much fuller range that currently available (mid-July), with stands at Westfield in Hammersmith (2nd June) and Arndale in Manchester (mid-June). The range is huge – absolutely huge, with everything from liquid effect eyeshadows to body tattoo stamps.

One thing I did notice is that they use a cartoon image as the ‘face of’ but this marks it out as very young range – it’s a mistake really, if it makes anyone out of their teen years bypass the brand because there really is something for everyone. Most of their make-up translates well across all age groups and I’m all for making savings. I’ve been playing around with the products and so far haven’t come across anything that doesn’t perform well – although I can only be about a 10th of the way through the lines!