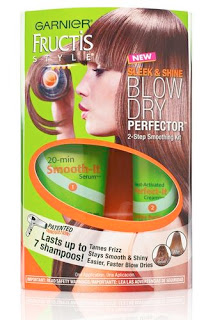 I got extremely excited about the new Garnier Fructis Sleek & Shine Blow Dry Perfector that has caused a big stir amongst the sleek haired in the US. I’ve seen mixed reviews about the product that uses rice oils (amongst many other ingredients), but it’s a very tempting promise – shiny, frizz free hair for seven shampoos with the home-use kit. It was only a matter of time before a Brazilian blow dry home kit was brought out by one of the big guns..but, here’s the kick. Garnier have no plans to release in the UK. Have they been here and seen the frizz? Haven’t they ever been caught in that truly British fine misty rain that does worse things to your hair than electrocution ever could? Garnier…come on!

Would you like to see it here too? Let me know if you think it’s fad or fab.