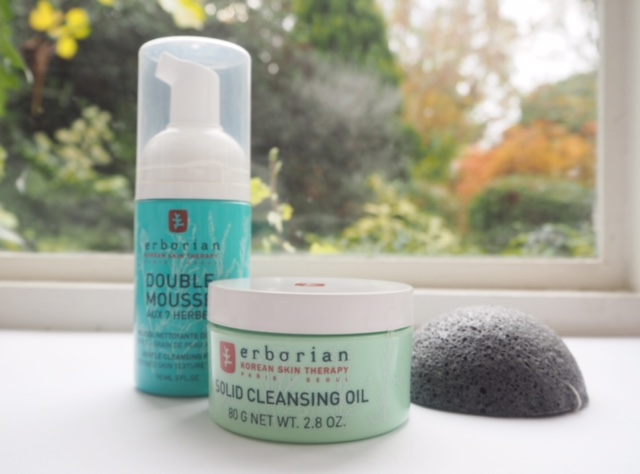 I’m a double cleanse convert. Group hug. Last week I was at an event with Erborian where my makeup artist friend, Kenneth Soh, was demonstrating the double cleanse. Like everyone else, I got really into the concept when it was first introduced but never quite managed to put it into regular practice. If I tell you I have been doing a double cleanse both morning and night all week, you’ll see how much of a convert I have become!

The bottom line is that I’ve found the products that are right for me – both Erborian (but everyone will have different favourites and this isn’t really an Erborian post, but more of a double cleanse post). First, the Solid Cleansing Oil (£29 HERE) which melts onto my skin – you only need a tiny bit (you can see that despite my new enthusiasm, I haven’t used very much) – and has such good slip that it’s almost impossible not to massage and massage. I’m also a complete convert to the Konjac sponge as a wipe off method. I like Konjacs (£10 HERE) generally but just like the double cleanse, never did incorporate it into my routine regularly). The thing about a Konjac is that you can’t over-do it – just keep on wiping away, rinsing regularly, until you feel it’s enough. It never makes your skin feel dry (it’s pH neutral) although it does have a bit of a jelly like quality which might make some people squirm a little.

The second part of the cleanse is the Erborian Double Mousse. Cleansing Mousses (the plural of mousse? it can’t be mice, surely?) have a tendency to make skin feel dry – the Erborian version is the opposite. It’s a texture that I haven’t come across in a mousse before – both foamy and moisturising, as well as being incredibly soft. Again, I rinse away with the Konjac. Both smell a bit strange – I know it’s a herbal smell, but it rather reminds me of green tea. Annoyingly, Double Mousse has launched on the French Erborian site but not on the UK one – it’s worth the wait though. I already regularly use the Erborian Herbal Energy Cleanser (in fact, it’s coming up as an empty in a forthcoming post).

So, after all the effort, what are the effects on my skin? For a start, the radiance level goes up – it’s a close as you can get to gleaming skin. Next, my skin feels incredibly soft and just has a look of glowiness about it that’s a level up from usual. Finally, anything that I put on afterwards (currently Institut Esthederm and more Erborian) seems to be boosted and penetrates more easily.

I can count the times in my life that I’ve been persuaded into a morning cleanse on one hand – I’m still not sure it’s strictly necessary but the point is that my skin looks and feels so much better for it and there’s enough of a benefit that I’m now prepared to put the effort in. I can’t promise it will last but right now, I’m all over the double cleanse!