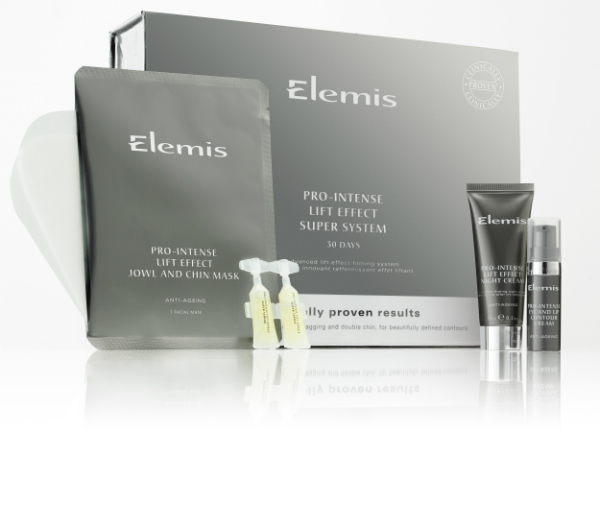 I’ve had this set sitting on my desk for a while and it wasn’t until I had dinner with a beauty journalist friend who could not rave enough about it that I was tempted to try it. I think, to be honest, it’s meant to look serious, but in fact, just looks dull.

However, the results could not be further from dull! The Pro Intense Lift Effect Super System flipping well is Super and I’ve only been using it for just over a week. It’s better I think to cut through the blurb; the bottom line of this is that it significantly firms the skin with plant and algae derived lipids that help to strengthen the patchwork of the skin. Elemis say that they work by attaching themselves to a cell that isn’t full and round to help them say stay full and plump. I’ve no reason to disbelieve their independent clinicals either, which state they were performed on 33 women aged 53+ over 60 days applying serum morning and evening. 97% reports of improvement of skin overall, 94% improvement in firming, 94% improvement in softening and 81% improvement in hydration.

I can see already that in terms of firming, this is something very special. My skin feels and looks firmer even at this early stage, and looks plumper without a doubt. I haven’t felt the benefit of hydration at all yet – if anything, the opposite and I think I would say I haven’t seen a softening improvement either, but as I say, early days. I can literally feel that my skin is firmer – it feels and looks tauter. It’s fair to say I’m quite excited about such special results.

Of COURSE there is a downside! It’s £155 for a month’s supply. Eek. For that you get thirty vials of miracleness (my word) – half a vial to be used morning and evening, a small Pro Intense Lift Effect Night Cream and a small Pro Intense Eye Cream as well as some very strange looking chin masks which are applied under the chin and secured around the ears (yes, really). I haven’t used those yet.

The Elemis Pro Intense Lift Effect Super System is meant for 55+ – I am nowhere near that and it’s still doing great things for my skin. I don’t normally give such high recommend for such a pricey product but if you have skin that is starting to thin or sag, do it! It’s HERE  (I should explain you get a £70 gift with purchase but I can’t quite work out exactly what it is!) .