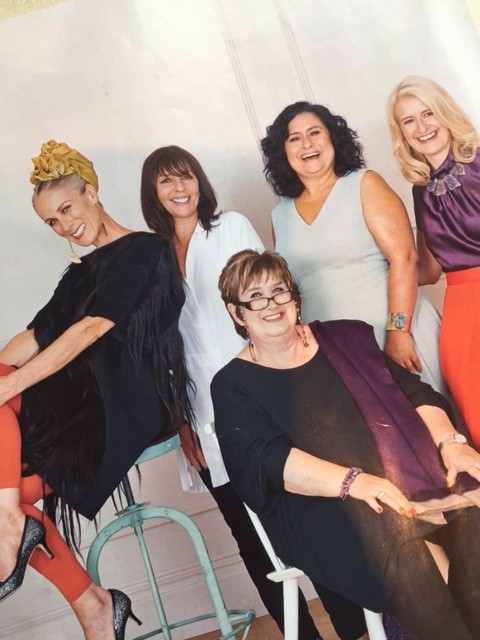 I mentioned on Periscope last week that I was working with a brand that I thought some readers would be surprised about. It’s no secret that some of what Dove does in the name of embracing women sets my teeth on edge (don’t start me again on #armpitgate). However, this shoot in the Dove Advanced Hair/Telegraph series has been a learning experience like no other. I’m going to say right ahead that I haven’t had a brand listen so intently to how older women would like to be spoken to (thanks in no small part to a very switched on brand manager) ever. Have they heard us? Not yet. But, it’s baby steps, and the crucial part is that they’re listening and actively want to learn.

So, you’ll see that I’m quoted as saying that I launched a section on my (unmentioned!!) website for older women “for them to feel included”. I think you’ll realise that I didn’t say that (I said I have an age inclusive website), but that ‘them’ speaks a million words about how younger women view older women. That little phrase somehow puts older women as ‘other’ from younger women, and we’re just not! We’re the same in so many ways.

Little wonder that we all, from age 48 to 77, look so happy  because we had a great day – age didn’t even come into it. We were laughing and joking along with the make up artist team, the hair team, the stylists (patience of saints.. I think they wanted to kill me when I hated all their clothes) and the photography team (also with saintly patience because I hate having my photo taken).. all younger than us – we weren’t ‘other’ on that day for being older than the stylist!

I’ve written some copy to go along with this campaign and was horrified to see that my careful words that were so meticulously written to be age inclusive about hair issues were captioned online with “Why Your Hair Needs Anti-Ageing”, presumably by someone in their twenties who assumed that younger looking hair MUST surely be a goal for anyone over 50.

If anything is completely clear, it’s that women of all ages need to stand back and not make assumptions about other women based on age. There are advantages in life that you can only have as an older woman; retrospect being one of them, just as there are advantages in being a younger woman, but paring us off at 50 into this ‘other’ category seems to be the worst thing that any brand can do if they really are celebrating age.   When I think about it, there really aren’t many beauty editors of 50+ – there are some, but not many. I don’t know of many 50+ women PRs in beauty either, nor do I know of many 50+ female brand managers, ad creatives or marketeers. Surely, surely, it would make sense – and bring back some normality to being older – if campaigns were directed by women who know how non-‘other’ it feels to be older. The bottom line here is that very often in beauty world, it’s younger women perpetuating the myth that older women need ‘curing’.

I never thought I’d say these words, but I have to applaud the Dove Hair team for their willingness to listen and their desire to learn. It’s one small team in a huge ocean of people who don’t get it and while there are many things I’d change, the team isn’t one of them. It’s crucial that we have influencers in the beauty world who want to do the right thing, who want to speak to us in the right way and who want their brands to be the first to nail it. I really hope it’s Dove Hair.