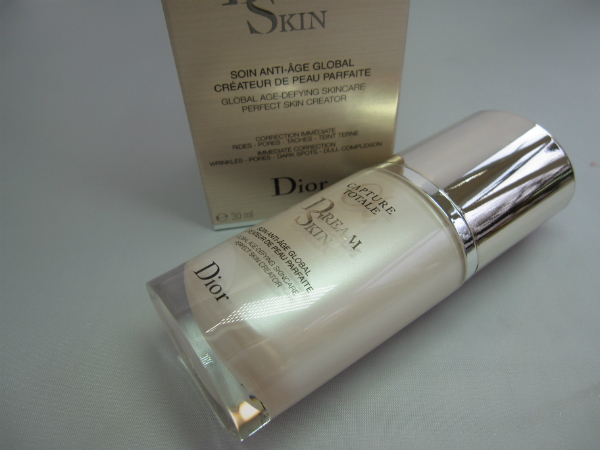 The aim of Dior Dreamskin is to be a skincare/instant perfecting effect hybrid and I’ve got say straight up that as far as the perfecting element goes, it works.

I hate disecting press releases (especially French ones.. sorry France!) into something more realistic; I’m very wary of it’s ‘neuroscience’ inspiration, and studies of optical behaviour of the skin (apparently, eye tracking reveals that if the path of the gaze (upon your face) is smooth and is limited to eyes, nose and mouth then the face is perceived as perfect, but if there is redness, dark spots, enlarged pores etc, the brain sees things as less perfect) but nonetheless it does give an optical blur on the skin in a far less clunky way than I’ve seen previously.

As I’ve only used it a few times, I can’t speak for its longer term effects, but the soft look or halo effect that it gives is pretty impressive. I didn’t have to sit in front of the mirror wondering if it had done anything – it had, beyond doubt. Made with mineral powders (mica platelets and hollow silica microspheres) Dreamskin literally glides over the complexion. However, Dreamskin claims to target redness, dark spots, dullness, wrinkles, enlarged pores and sagging. I actually want to drink it!

I’ve no reason to doubt that any of the longer term claims aren’t viable – but it’s the immediate effect that’s grabbed my attention and I’m happy to recommend it. Definitely one for the skincare curious if you don’t mind shelling out £79 for it (I totally would) when it launches towards the end of January.