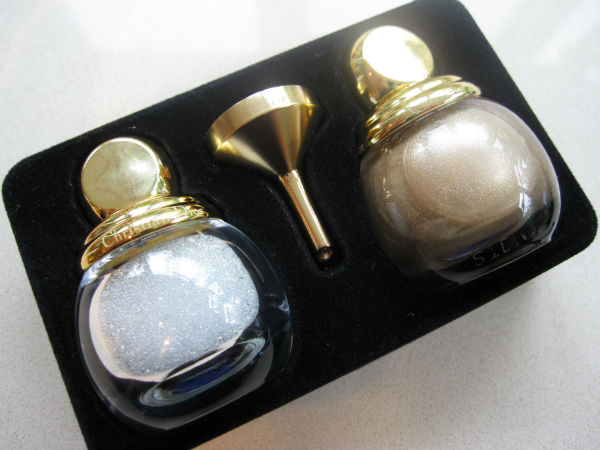 I’ve had lots of requests to swatch the Dior Jewel Manicure to see if it is any different to other similar products.

First learning is that you definitely need two coats of the gold polish – one is too thin to hold the beads. However, once they’re on and you’ve given them about ten minutes to dry properly, the beads do hold. A couple of hours on from this picture and they’re pretty much all still there.

I tried the transparent beads on Dior’s Marilyn shade – love the effect, but whether it is a question of the gold being metallic, initially it didn’t work out as well in terms of hold.. and took nearly forever to dry; you need far more patience but I do like the effect.

As I moved around the kitchen where I take my pictures, the gold kept flashing as it caught the light – the red didn’t at all, not unexpectedly.

So, in some lights, the gold looks rather dull, but I think its strength is that when it does catch it really glimmers, and with the textural element, looks amazing. I think this look is a great accessory to a beautiful black or red dress – definitely glamorous, definitely works as it is meant to and definitely show-stopping. I find it hard to imagine that it is made to a different formula than other like products, but it’s definitely not shedding which is an issue I have had with others in the past. It hasn’t launched yet.