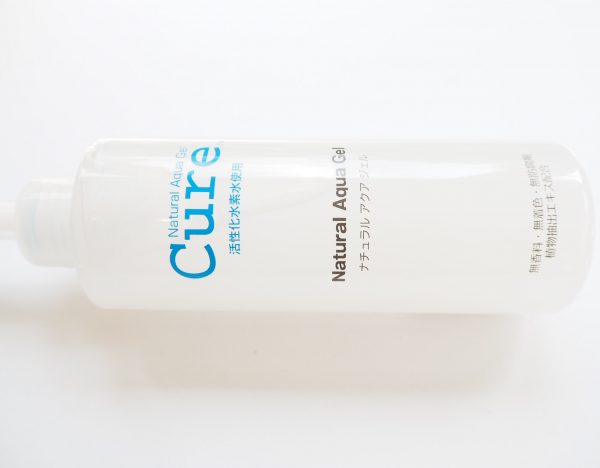 Apparantly, a bottle of Cure Natural Aqua Gel sells every 12 seconds in Japan. I say apparently because given that it’s so popular, it was more difficult than you might imagine for Mr BBB to find it. It’s very similar – okay, the same – as Ginvera Marvel Gel which I know a lot of bloggers have tried, which is also billed as Japan’s best selling exfoliator. Well, they can’t all be..

The gel is loose and a bit watery, and once it’s on your skin you start to massage it around. Nothing happens for a little while and then suddenly you get piles of little skin rolls which aren’t pretty because they’re kinda grubby!

As you can see above, grubby swirls! Now, although there is definitely an exfoliating effect because the product does bring dirt off the skin and if it’s bringing dirt, it must be bringing old skin cells, there is just NO way that this could all be skin. My bottle is in Japanese, but I’ve scoured the internet for other reviews and it’s more or less a fifty fifty split of believers and non-believers. If you’re a non believer then you’ll subscibe to the acrylates polymer meets water evaporation theory of the swirl production. If not, then okay fine, it’s skin.

I’ve used Cure Natural Aqua Gel on my inner arm several times in a row – each time the balls form, and yet, there cannot be that much spare skin to come off so many times! The gel itself is gentle and my arm definitely feels smoother, so I believe some exfoliation takes place. But this one, to my mind, is a bit like the rabbit out of the magician’s hat: you know you’ve been fooled but can’t quite work it out! It’s fun to try and certainly has caused no harm at all to my skin – you can find it very readily on Amazon, or opt for Ginvera or there are even a few Korean alternatives. There is no way that this product can ‘eliminate blackheads’ as claimed.