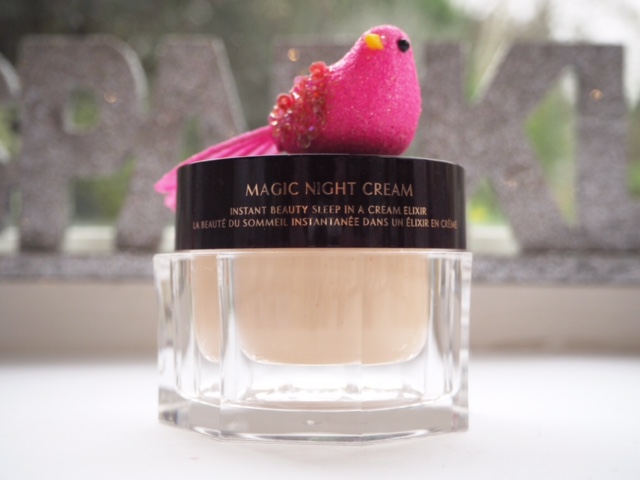 One of the first things to say about the forthcoming Charlotte Tilbury Night Cream is that it’s designed to give fast results. So, although I’ve only put it to a three night test, that is plenty to give a short term review, especially when results definitely do show by morning. It’s a bit of a mixed review this one, because while you will undoubtedly wake up to skin that feels moisture saturated and undeniably firmer (revelation in fast acting products!) you pay for it in the initial consistency. There’s no two ways about it, Charlotte Tilbury Night Cream is sticky. It feels as though it’s got honey in it, although it doesn’t, and you need to wash your hands after applying. I really don’t love the texture. Although the big sell on the cream is Water Daphne stem cell and time released Retinol, I think it’s the latter, along with a dose of peptides that’s doing the majority of the work. Also in the mix is Olus Oil that acts as a barrier to prevent moisture loss, and it’s that ingredient I think that creates a feeling of a protective film when you wake up.

Charlotte is the first to say that she doesn’t look after skin in the way she feels she should – she’s travelling all the time and has two small children, likes late nights and a glass of wine.. none of which are condusive to skin that looks rested! That’s exactly the kind of lifestyle skin that Charlotte Tilbury Night Cream is designed to treat. I’ve met her many times and her skin does look amazing, so if she’s testament to what this cream can do, then I have to say it’s impressive. A little goes a long way, if you can get past the sticky feel, and so it should at £100 a pot – it’s a serious skin investment, but I think it’s going to be a marmite product – you will either love it or hate it. I actually can’t believe that it’s not possible to make this cream less tacky.

Briefly, there’s an eye cream coming as well, but I found that I had a reaction to it so can’t really give any kind of review. It’s a case of ‘it’s me, not you’ because I react easily to eye creams and end up looking more puffy than before I began. Texturally, it’s completely different to the night cream – much creamier and smoother to apply, but there’s something in it that doesn’t like me!

The Charlotte Tilbury Night Cream doesn’t launch til the new year so you have plenty of time to ponder on whether £100 is a good investment. If you like a luxury spend, you will certainly get noticably firmer feeling and smoother looking skin very quickly.