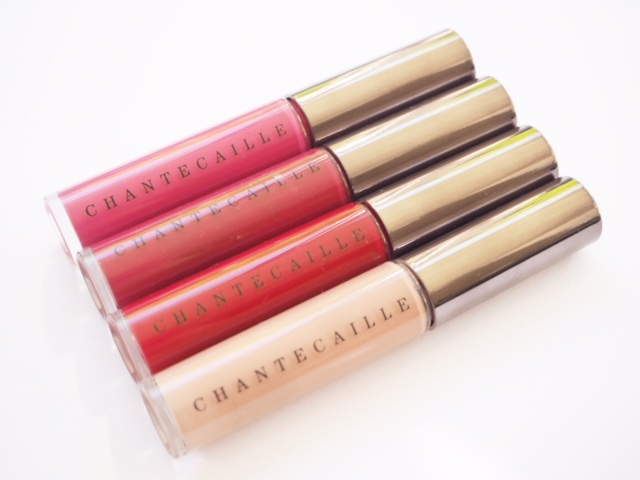 Oh.. very typically, just when I’m saying there isn’t enough colour cosmetic innovation, along comes Chantecaille Matte Chic Lipstick which has raised the bar in terms of matte. This stuff! I’m not a fan of mattes but I can do this and here’s why. I can barely feel it on my lips. The formula is hyaluronic and peptide based and it’s something of a miracle to get the level of pigment into a product that feels not there at all. As soon as I put it on my lips, the ‘wow’ word escaped!

So, it looks, in the swatch, as though it should feel dry and yet, it is the least drying, whisper feeling, silky matte I’ve ever encountered. The shades above (from bottom to top) are Dorian, Dovima, Carmen and Suzy. It’s described to me as ‘incredibly moisturising’ which I would disagree with, but it doesn’t leach moisture out of the lip which many mattes do and leaves them feeling plump and comfortable. I found it smoothing (I have the most naturally creased lips of anyone I know!) thanks to hyaluronic acid and the claims of no feathering or bleeding are absolutely bang on. You smack down the colour onto your lips and that’s where it stays. Which brings me round to longevity. Matte Chic isn’t the longest lasting matte lipstick; there are some formulas around that you virtually have to chip off, but the pay-back for the small amount of extra attention you’ll need to give your lips in terms of top-ups is the feel of freedom on your mouth, a blurring effect across any creases and no loss of moisture. Definitely a fair deal.

In terms of price, it’s Chantecaille – expect big dollars! The Chantecaille Matte Chic lipsticks are £36 each and worth it. They’ll be available from October.

There are also two Mermaid Eye Colours launching at the same time – shimmery washes in a crease-proof formula that give a grown up metallic effect. I don’t feel these are too special in the same way that the Chantecaille Matte Chic Lipsticks are, but I can’t fault them on performance.

Two shades will be available – shimmery Copper (which is more gold to my eyes) and Hematite which is a light, lavender-backed beige pearl and they’re £29 each.