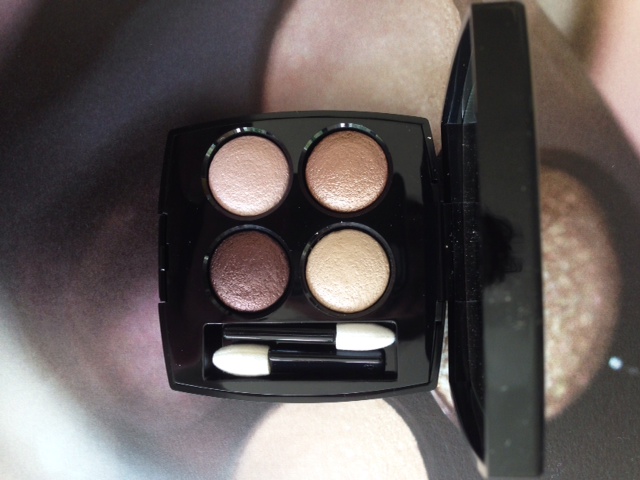 The Etats Poetiques collection launches on 15th August – predictably, because I’m such a Chanel fan, I love it. It’s a very pared back collection in some respects; muted, milky washes for lips, stark grey for nails, and then a big smack of colour for the eyes with the monos.

Poesie, the Quad, is just lovely – it’s like a bar of Neopolitan icecream (although I never did agree with mixing chocolate and strawberry #wrong) with a very smooth application and a big wash of colour. Each swatch is one sponge applicator swipe, so you can see how much goes on and how evenly, too.

Here’s where the colour kick comes in! These are the Ombre Essentielles – two limited editions (including the mauve shade, Pulsion); the rest are suggested for the look. The yellow shade is Admiration and the pink is Exaltation.

Personally, I won’t be going anywhere near Admiration for fear of exactly the opposite of what the name suggests!

As you can see, they are barely there, but Songe does give off a beautiful iridescent sheen to wear alone or over a deeper nude colour.

For nails, it’s rather stark. These two shades, Orage and Secret, are joining the range, and unhelpfully, I haven’t got the limited edition colour, Atmosphere. However, I’m all over Orage as soon as I’m out of nail rehab!