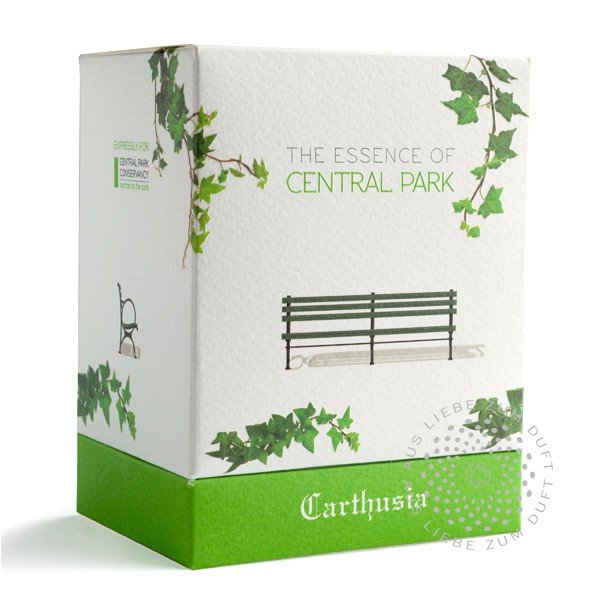 When the concept of The Essence of Central Park was put to me, I was kind of horrified. I mean, I’ve seen Law & Order – I know not to jog at night there! What could there be that’s pleasant about a fragrance of the world’s most dangerous park (according to SVU)? But then, I was reminded of my mum who lives in Scotland in pretty much the middle of nowhere saying that coming to stay with me in London was like visiting The Bronx because there were so many police cars going past. I’ll just point out that she has never been to The Bronx. So, bottom line is that US police procedurals have ruined our perception of places in the US; in particular Central Park, which seems to be the hub of all TV murders in the entire world. I mean, it’s just not that exciting if Olivia goes for a stroll and a skinny mocha-frappe in Central Park, right?

Carthusia’s take on Central Park is that it’s a lush and green island within an urban environment and it’s been created with the Central Park Conservancy (a non-profit that looks after the park). So, I thought I’d better bring up some happy memories of Central Park that aren’t linked to the detectives. Me and Mr BBB had flown over to NYC 13 years ago to surprise my sister (who lived in the US) and her new baby (I’d met him once before). We spent one night in NYC (and it’s the only time in my entire life that I actually fell asleep at dinner) before going back to the airport. We sat in the waiting lounge with our backs to her as she got off the plane with the baby and just kind of casually said, ‘Oh, hi Sally’.. she turned round and screamed!

We had a little picnic there while I got to know my new nephew, Callum, better. I know we sat on rocks in the sunshine and there was a giant black poodle that I was mesmerised by (yes, poor nephew was usurped by a hound) because he nudged his owner every time he wanted his attention – which was often. I can’t remember what we ate, but I do know we all ended up at an Irish pub in Time Square because it was the football world cup. Anyway, my nephew is 14 now!

My most recent visit to Central Park was last December; my birthday trip to NYC with my best friend, daughter and sister. We crossed through Central Park to get to a branch of Century 21; the best reason to go for a walk is if there is a shop at the end of it. It definitely makes you walk a bit quicker!

And, they’re both really happy memories of that park. So, maybe Essence of Central Park might spring those real events to mind rather than the fictitious horrors of TV drama. The description is of magnolia, winter honeysuckle, linden and artemisia , which doesn’t mean anything to me – my olfactory memory of Central Park is that it smelled quite dry and dusty. But, it’s a bit like asking a New Yorker to conjour up the smell of Hyde Park in their heads.

Anyway, it’s only interesting in that a fragrance – without me even smelling it – has done that trick that only perfume can do of awakening memories of experiences you’d forgotten you even had.