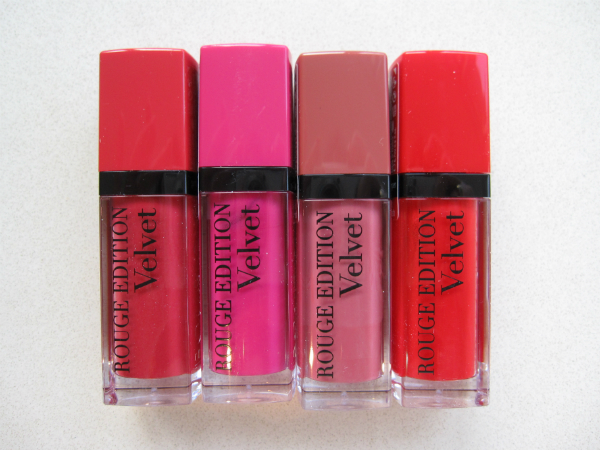 There’s a lot of newness coming from Bourjois so I’ll divide it up into several posts, but starting with Bourjois Rouge Edition Lip Velvets, which are the first to launch in April. The Bourjois Rouge Edition Lip Velvets are liquid lipsticks – matte – with strong hold. Bourjois says 24 hour hold which to my mind isn’t that useful but it’s their way of saying that it stays put! There are eight shades coming – above from left to right are: Frambourjois, Pink Pong, Nude-ist and Hot Pepper (loving the names!).

I wore Nude-ist yesterday and unlike most mattes, I didn’t find it drying, but I only wore it for about three hours so I need to do it a little longer to be really sure. As you can see from the swatch, the colours are intense; I noticed that you don’t get too much on the doe’s foot wand meaning that you can build it up a layer or two for even stronger colour and not end up with mega-pigment lips too soon! The formula – once dried – feels as though you are wearing nothing!

Bourjois Rouge Edition Lip Velvets launch in April for £8.99 each (I am sure Bourjois prices are sneaking up!).