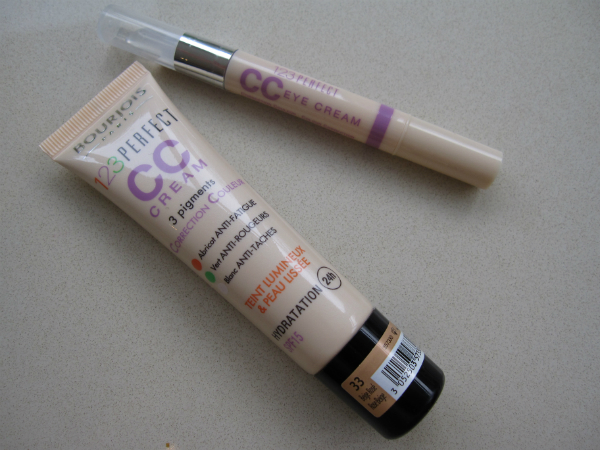 It’s not like Bourjois to be behind in new products, but we don’t get their 123 Perfect CC cream til the end of January. But, it’s very well worth the wait because it’s fabulous. I’m a big fan of Bourjois foundations and bases anyway so it isn’t really a surprise that I love this so much!

I’ve got three of the initial four shades above (from bottom to top: Light Beige, Ivory and Rose Beige). The Bourjois CC Cream is thinner than most CCs I have come across but that doesn’t mean that coverage isn’t great – it is. And it fulfils the ‘coverage’ element with medium coverage. The ‘correction’ element is given with three main pigments; apricot (to enliven tone), green (to cancel redness) and white (to diminish pigmentation). The formula also has hydrating elements. I’ve used it today and on initial application it feels a little dry (in common with many CC creams I have tried), despite its fluidity, but is very skin softening once on and especially so for an oil-free formula.

Bourjois CC Cream is more foundation than CC I think, but saying that, it’s true to Bourjois formulas in that it gives beautiful, smooth coverage that feels soft and comfortable on the skin. There’s no doubt that it gave my skin tone a more even appearance, although I can’t say I noticed any ‘enlivening’ and I liked the tone warming and evening-out of Light Beige. I think this is probably the CC for people who don’t like CCs! Personally, it’s exactly the kind of base I like and there is nothing not to like for my preferences;  but if you’re after one of the heavier style CCs this isn’t it.

Bourjois 123 CC Cream launches at the end of January 2014 for £9.99. There’s also a CC Eye Cream Concealer but it’s only in two shades. Again, beautifully soft and hydrating on the skin but I don’t think it really out-performed other concealers I’ve tried in hiding dark circles. It’s a good, reliable basic though and will be more than adequate for minor dark circles. It launches at the same time as the CC for £7.99.