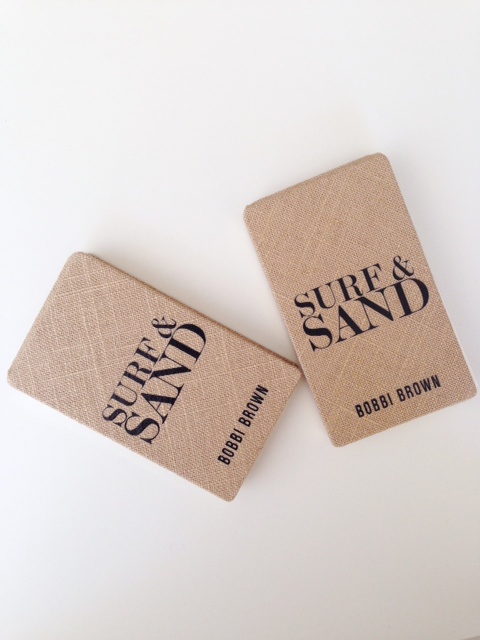 The Bobbi Brown Surf & Sand Collection definitely falls into two camps. One great, the other not so.

First up, Surf Eye Palette. I just don’t get this at all and I feel we have been here many times before with Bobbi Brown. While on the surface, it looks like it’s going to give pops of colour, in fact, the pigment is so bare that initially I thought maybe there was something wrong with the product. The green shade and the pretty duck egg blue translate to nothing but the merest nuance of colour, although they have plenty of fine shimmer and sparkle. They’re also different in texture to the other other shades – harder somehow and even with my most trusty swatch brush, I found it hard to pick up any colour at all.

You can see from the swatch that it is the lightest of palettes. Of course, that’s really going to suit some women who love the nuances that Bobbi is so good at – all I’m saying is that the payoff isn’t as good as it looks as though it might be. Those two shade in particular are supposed to be super-light, but even with that in mind, there is light and there is nothing.

The second palette, Sand, is much, much better!

Sand ranges from traditional matte nuance to smacks of colour, and I feel it just delivers more – there is no shade I’m disappointed with here, other than maybe the first, very pale one which is hardly showing at all. However, if you’re a Bobbi fan, then you’ll already be used to these ‘maybe’ colours. At £48 a pop, I think I want every shade to be completely and reliably present!

Anyway, there are some beautiful Sheer Lip Colours, which I’ll pop in a separate post, which I LOVE and two limited edition Brightening Blushes, which also get a thumbs up. It’s this month for launch so you’ll be able to find it at usual BB counters.