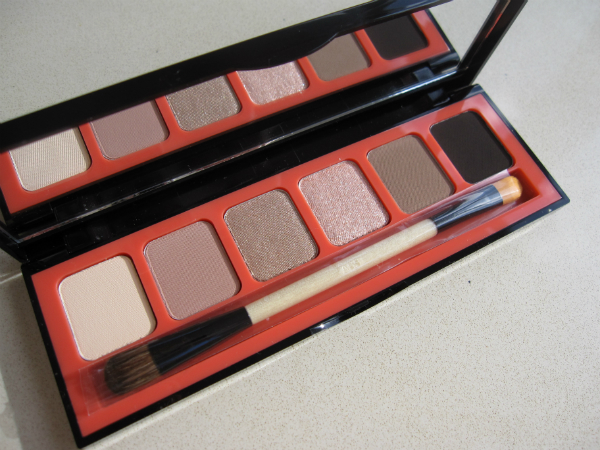 I still think the Bobbi Brown Nectar & Nude palette is the weakest point of the Nectar & Nude collection. It’s just not very exciting but ticks all the boxes, as Bobbi Brown palettes usually do, in making a beautiful neutral eye that you can add some depth or sparkle to.

The shades are warm and discreet, nicely buildable and easy to work with though, and I do see that it fits in beautifully with the rest of the Nectar & Nude collection. The shades from right to left are: Pale Cream, Soft Buff, Golden Bronze, Pink Bellini, Earth and Rich Caviar. And, it’s £37 which is quite a lot to pay out if you already have these shades in existing Bobbi palettes or other brands.

Bobbi glosses are some of my absolute favourites for their colours and ability to last a little longer than many glosses do. There’s no ‘light on the lip’ with these – they are a little sticky but that’s what keeps the colour there and for me that’s an acceptable pay-off. The first shade is Nectar and the second shade is Nude Pink.

The nails are my favourite part of the Bobbi Brown Nectar & Nude collection – it’s like the sun shone and kissed them! Nectar is a burst of papaya that is quite a deep shade on the nail – not quite orange and not quite pink.

Bare Peach is the lightest of shimmer washes – so pretty – and has golden and iridescent particles in it. One light coat over Nectar adds another dimension but it’s an understated twinkle (nice over nude polish as well).

Finally, on the swatch front, the Bobbi Brown Pot Rouge in Hibiscus. It’s totally a colour pop for the cheeks – less so for lips – so you need to go with caution on cheeks (as I’ve just discovered!). Because it’s a formula designed for lips as well, it does take a little blending on the cheek – it isn’t a formula with lots of slip (otherwise it wouldn’t stay on the lip) – my tip for this is go very light and add more if needs be. The Bobbi Brown Nectar & Nude collection launches in March.