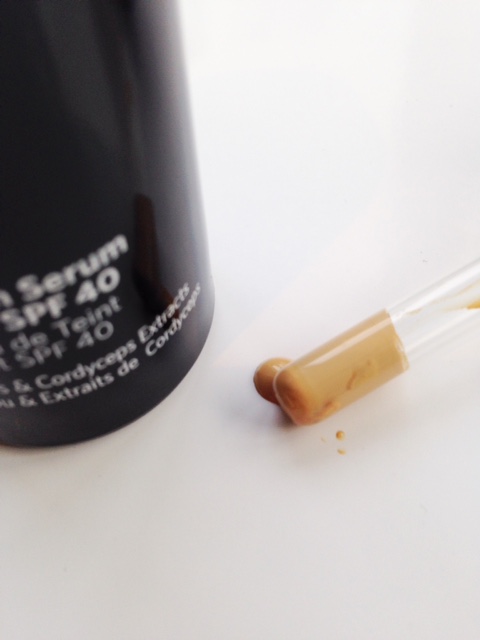 I knew, just knew that I would love the Bobbi Brown Intensive Serum Foundation. So much so that I bought it this afternoon while I was in London. Actually, it was a very timely thing to do – bloggers are often sheltered from the counter experience because they’re sent product or see it at launch, but I thought it would be good to have some Bobbi counter time.

I needed to be colour matched for exactly the right shade – at £39 a bottle, I didn’t want to do it myself and hope for the best. I know that one of the major players in the formula is Cordyceps Mushroom used in traditional Chinese medicine. While that in itself isn’t a particular sell for me, it is known as a skin energiser. What the Bobbi Brown Intensive Serum Foundation promises to do is boost the skin’s repairing ability, boost moisture, firm, lift and smooth, and replenish lipids – in other words, a proper skincare/makeup hybrid. It’s probably Bobbi Brown’s most technical and advanced product yet.

So, back to the counter with Ivan, the Bobbi consultant, who spent a lot of time patting the foundation into my skin. My shade, as it transpires, is Natural 4, to reflect the slightly olive tones in my complexion. The formula is like an instant hit of velvet – Bobbi Brown Intensive Serum Foundation gives the most beautiful radiance and actually feels soothing on the skin. It isn’t a heavy formula, but in the same way that if you have applied moisturiser, it’s not weightless either. Mostly though, and what distinguishes this blend from any other that I’ve known, is that it feels instantly skin compatible – like it loves your skin! I have experienced that only with certain facial oils (NUDE, Sarah Chapman) before and never with a foundation.

If your skin runs to oily, you might find you need a powder with it – it’s also got SPF40 so that’s one to bear in mind if your skin is sensitive to SPF. However, hand on heart, it’s an absolute winner, particularly for mature or dry skin. It’s HERE.

At counter, although I was asked to leave my details, no fuss was made when I refused, and no fuss either when I said I didn’t want a face chart (although there was a little bit of a disappointed face!). Ivan was so charming and straight to the point (with a little encouragement) that I got exactly what I needed and wanted and was out within five minutes. Perfect!