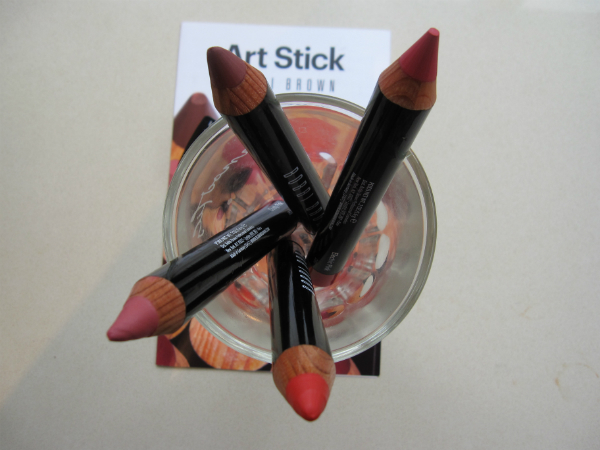 Bobbi Brown Art Sticks are well on their way – it’s a May launch for the UK at Selfridges. Looking at the sticks, the colours seem quite dull, but they spring to life once on the lips. They’re beautifully chunky and one swish around the lips is all you need. I noticed that the formula is quite creamy and initially feels moisturising on the lip, but they don’t stay as moisturising as time goes on.

I have four Bobbi Brown Art Sticks to swatch – the neutral shades are perfect for my skin tone (and less brave lipstick days). From left to right: Electric Pink, Dusky Pink, Sunset Orange and Rose Brown. The sticks promise six hours of wear but if you’re topping up with gloss (because they’re quite matte) they won’t last as long. Maybe it’s just me but I’m never really sold on long-wear – they never do last quite as long as promised and it’s not ever clear whether the claims (and I’m not really talking Bobbi here) mean that there will be some faint trace after a certain number of hours or whether it will still be a strong and bold colour. I can quite honestly say I have never had a long last product look ‘just applied’ past an hour!

Anyway, Bobbi Brown Art Sticks are £19 each – great if you just want something handy to chuck in your bag for the day. They’re pretty much fuss free – and come with a massive sharpener!