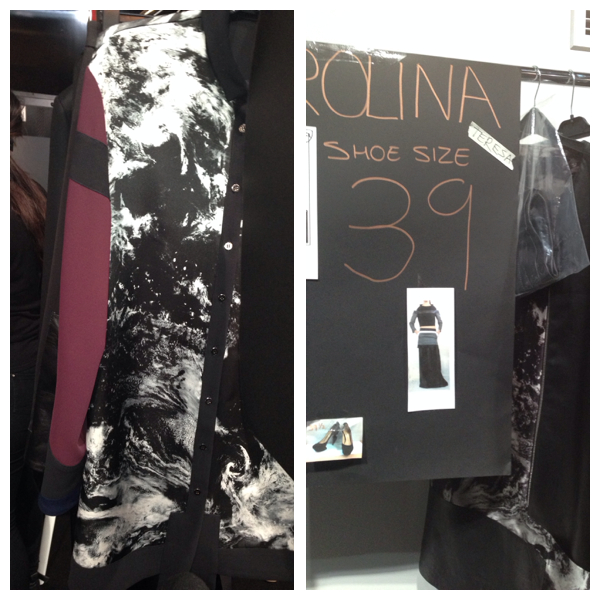 A hectic morning backstage with MAC Cosmetics who were doing the make-up for Jean-Pierre Braganza – it’s always frenzied with more than one person working on a model at any one time and it’s rammed! There are just so many people squeezing into little gaps that you have to find a space where you aren’t in anyone’s way.

Head of Make Up Artistry for MAC, Terry Barber, created the Tri-Line for the show in keeping with the futuristic elements of the clothes as well as the couture angle. So, the Tri-Line is one line on the upper lid winging out, a line under the lower lashes, also winging out, but slightly less so that the top wing, and finally one last line below the natural under-eye crease. You can also see the Fall Trend Forecast Palette shades above; this is coming in March time. It’s a mix of strong, strong berries and shimmering pastels.

I’ve never had a plait in my life, but now I want one – and with a white streak running through it please, as seen above. There were also near-navy and dusty lilac hair pieces woven into long plaits – navy hair shouldn’t be a thing.. but it totally works. Hair is by Label M.

On the catwalk, the hair and the make-up totally worked with the mixed texture garments.

Post show, I got the sneakiest of peeks at some new 3D Glitters – they’re soooo shimmery! I had literally seconds to photograph these so I won’t score any points for amazing pictures, but there’s a black, lavender, brassy gold and platinum, all multi-dimensional and mega-watt glimmer.

I had a quick word with Terry Barber – we were supposed to be talking about make-up, but ended up talking about our mutual love of dogs – he has a beloved Staffie – and how he spends his downtime (in the park, walking the dog!). I wanted to know what exotic island he disappears to after the fashion weeks madness (New York has already been and Milan and Paris are still to come as soon as London is over) but he’s a staycationer – home time is what he likes best. I did get one little tip though – wear lip primer (MAC Prep & Prime Lip) under matte lipstick to iron out creases and make it a more comfortable wear.