Backstage With The Body Shop At Fashion Scout 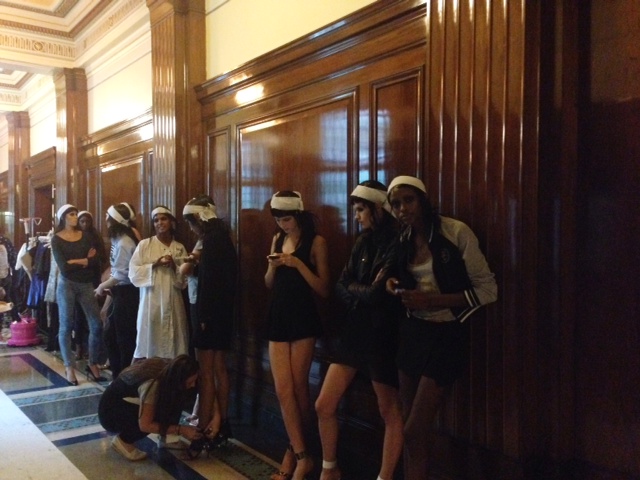 It was a very different experience this time to the usual backstage experience. Journalists and bloggers are squeezed in backstage so they can get an idea of the beauty and hair looks being used and as an indicator of forthcoming trends for both. And believe, me, it’s a squeeze! If you’re really lucky, you get to stand between some coats and bags in a corner, and even then, somehow, you’re still in the way. The level of noise, activity and anticipation is intense, as hair stylists, makeup artists and nail artists all work at the same time in a tiny space.

So, when The Body Shop gave me the challenge to be a novice nail artist for the day, I jumped at it! That was weeks ago. Over the last couple of days, I really started to worry that I’d bitten off more than I could chew and while I love doing nails, the models weren’t going to be all helpfully lined up at a table with their fingers proffered. 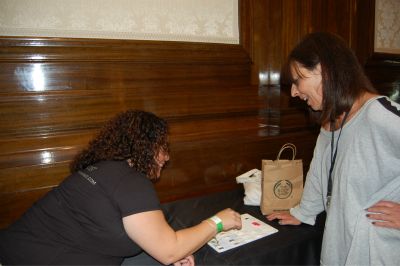 So today was D-Day – I deliberately held off on the caffeine because I was worried about shaking and smudging a nail! Once I’d got to The Freemason’s Hall at 10.30am where Fashion Scout takes place, I was introduced to Naomi Gonzalez-Longstaff, lead nail artist for Fashion Scout and the team of professional nail artists that I’d be part of. They couldn’t have been kinder or more welcoming, but they didn’t realise I wasn’t actually a nail artist, so I kind of had to break it to them!

Next, I had a look at the design board that Naomi had created – I was supposed to do four looks, starting with pink clouds on a white background, for four different shows. One was plain nails, one pink clouds, one a Japanese inspired graffiti design and the final one was a black nail with an ebony tip and a matte black diamante. They’re all in the picture above. The rest of the team committed the designs to memory in a moment – Naomi had to leave the board with me because I just couldn’t keep the designs and the colours in my head. 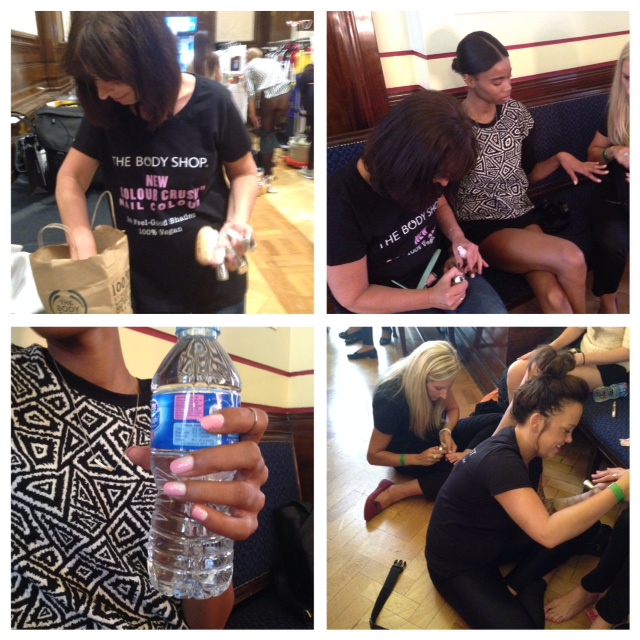 Things started off quite well for the Bernard Chandran show nails – one coat of Colour Crush Pink Frosting as a creamy base, followed by two bubble shapes in Colour Crush Oh Petal to form the clouds. I had the loveliest model, above, Rachelle, from New York who thankfully was completely laid back – and luckily, because my hands were shaking so much that we got off to a wobbly start.

Concentrating so hard on the Oh Petal clouds, I somehow managed to do them the wrong way round, so it all had to come off and another member of the team had to do them. If that wasn’t bad and shameful enough, we found out at the very last moment that the models needed their feet doing too, so I stripped off the paint Rachelle was wearing on her toes and painted them up beautifully – in the wrong colour! 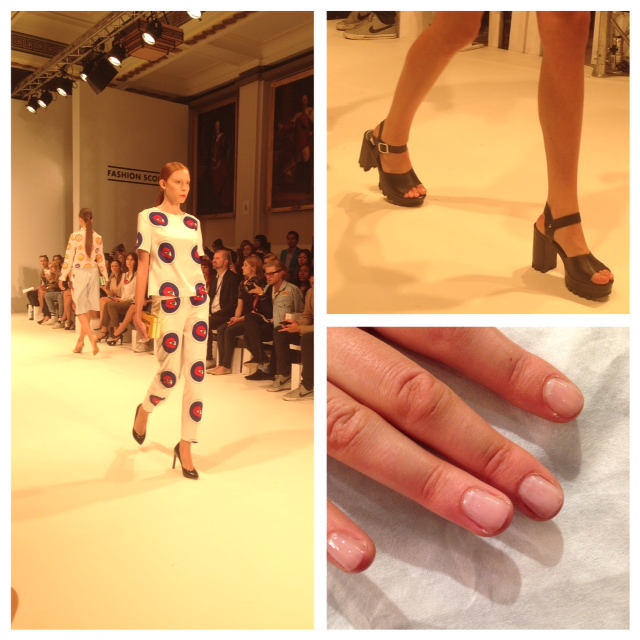 By the time that had been rectified, more models were arriving for the next show, The Kiev Showcase, so there just wasn’t time to beat myself up about it. Thankfully, it was a plain nail in Colour Crush Pink Cream (two coats) but this time, the teams were up against the clock because there were so many models for that particular show. So, all hands on models which meant I was on the floor on my knees half under a table just to get access to my first model’s fingertips. Most of the models were wearing gel nails so they needed the polish from their last show off, some tidying up, and then new coats added. 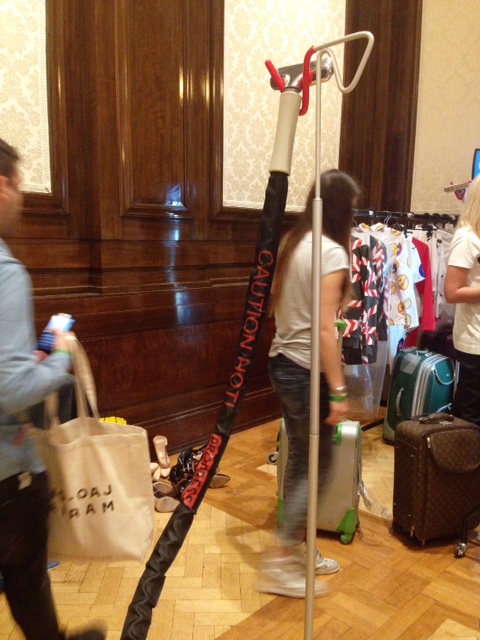 One thing you don’t realise is that teams of artists – and the models – come from all over the world, so you hear a lot of different languages amid the frantic chatter. And nobody talks to the models! They’re literally just beings that need transforming and it’s one of the reasons they’re always texting while they’re being made over. However, when you’re doing their hands, they can’t text so there’s room for some chat if they want to. I did chat a little with my models but it’s so noisy, it’s hard to be heard. While I was on the floor – honestly half under a table, someone actually stood on me to change a light bulb. But, I got the job done and it looked really good. As soon as I’d finished though, it was straight onto the next model. Nobody instructs you where to go – you just have to look for models who haven’t had their nails done yet and winkle your way in through the legs and hair dryer cords! I managed to get three models done for that show and my confidence went up a bit – at least my hands had stopped shaking!

It’s lucky that the models know exactly where to place their hands and feet – when you’re kneeling on the floor trying to get to the extremities of someone who is nearly 6ft tall; it’s limbs everywhere! Being on the floor, you also get absolutely covered in hair spray – a hazard nobody mentions!

There was a little bit of a break, after a bit of blogger chat with Victoria from Kokosecrets (HERE) I managed to see the two shows that I’d helped with the nails for – or hindered, as it was for the first show! I hardly saw the clothes because I was so focussed on the nails (so hard to capture on camera as well) – especially the feet. One of the models I worked on had three coats of polish where at her last show, they’d just painted on a metallic over what she was already wearing from the previous show, and it took nearly forever to get off. Of the four models I worked on, I only recognised two on the catwalk which gives you an idea of how little you see the model as a person under those circumstances. 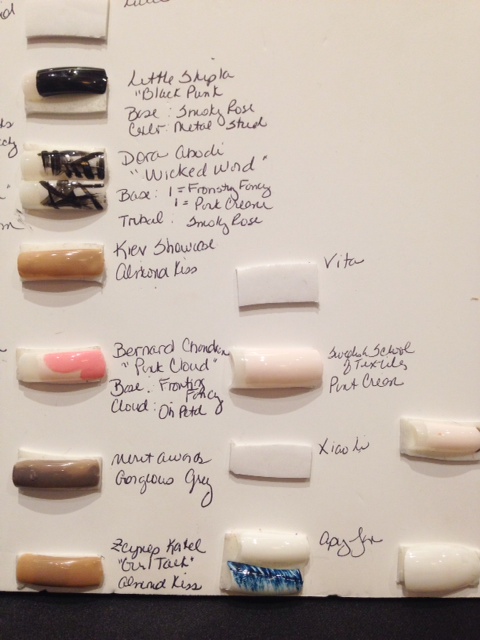 With two more shows to go, I knew that I couldn’t manage the Japanese style nails – you need to work so quickly and it was such a complicated detail (for a novice) – by the time I got to the room (there’s a lot of running up and down stairs in that venue) where the dark nails were being painted in near black Colour Crush Smoky Rose, they’d pretty much been done. To be honest, I was so relieved.

Having a cup of tea with the team (at 3pm; their first break of the day, and they were there way before me) was a lovely way to catch my breath. I think I was blessed that they were so kind – Naomi was endlessly encouraging and gave me a high five for my plain coat nails, while the girls from Morena’s, wiped up my mistakes when they really didn’t have time to. I left the venue feeling a bit shell-shocked, to be honest, completely exhausted with a backache, and also a little guilty that the rest of the team still had a hard core four hours to go before they could knock off.

The experience has taught me that to work backstage not only do you need to be talented, fast, unobtrusive, able to squeeze into the size of a teacup, diplomatic, unflustered and organised but you also need the stamina of an athlete. I could never do this in ‘real life’!

One of the absolute bonuses of The Body Shop Colour Crush Nail Polishes is that they dry really quickly; a big fear was putting on too much polish and it getting smeared on the clothes (believe me, I’ve lost sleep over that particular anxiety). But, not a bit of it. The polishes performed over and above for the job, particularly in that respect – you can go so much more quickly when the coats dry fast. 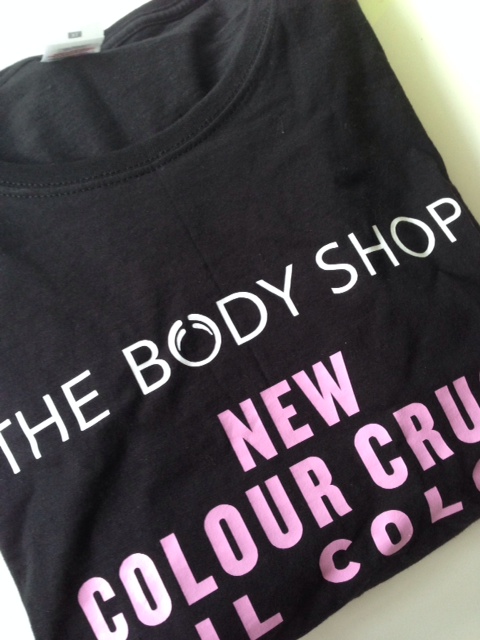 I’ve loved my real backstage experience with The Body Shop, and I have the T-Shirt to prove I was there, but I can safely say, never again!

Home › Article › Backstage With The Body Shop At Fashion Scout