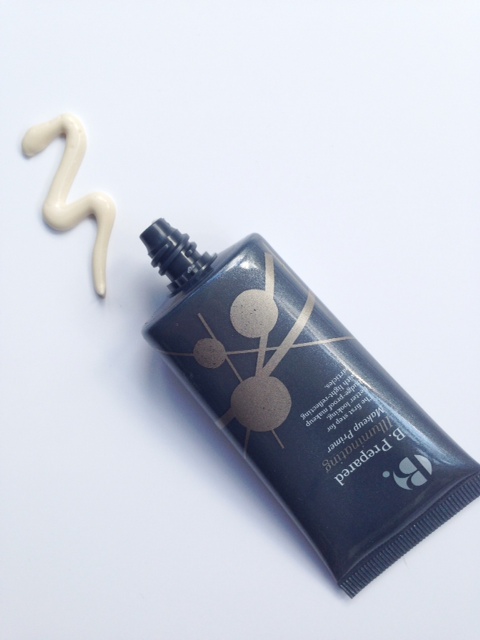 Ooh, I’m really impressed with the new B. Prepared Illuminating Makeup Primer. I was put off primers years ago by a slew of ‘priming’ products that I thought were more The Emperor’s New Clothes than actually doing anything visible that I could see. I can distinctly remember being introduced to primers by other bloggers and wondering what it was they could see that I couldn’t. Since then, primers have moved along, particularly in the blur department, and while B. Prepared Illuminating Makeup Primer isn’t a blur at all, it does have a strong radiance element.

I’ve half rubbed the swatch in – but it’s a little difficult to pick up the full effect which is almost iridescent. Cassie Lomas, B.’s makeup ambassador suggests mixing it with your regular foundation for a semi-coverage effect that gives more glow than usual, and that’s exactly how I’d use it myself – as weekend makeup. Better yet, it’s got a whack of hyaluronic in it (and Vitamin E) so it feels light and hydrating on the skin.

On the BeautyPlus.com I’ve been talking about the ‘milk line’ – that fine whitish line that many of us have directly above the top lip and how it’s something to feature more on the face because it’s such a pretty thing. Well, B. Prepared Illuminating Makeup Primer is exactly right for doing just that – use a cotton bud to apply a tiny amount just above the upper lip. You don’t want to greatly exacerbate the line, but just make it a touch more noticable. Otherwise, you can use B. Prepared Illuminating Makeup Primer as a basic primer, under whatever base you are using next. It keeps your skin nicely hydrated (useful if your foundation is quite powdery) and just gives a little ‘lift’ in tone.

B. Prepared Illuminating Makeup Primer is £9.99 and launches in October at Superdrug.