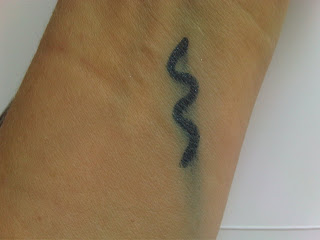 I’m so obsessed with navy eye-liners at the moment, so for the first time in many years, something from Avon caught my attention. The Mega Impact Gel Eye-Liner in Cobalt launches at the end of this month and I’m telling you, nothing budges this stuff! I’ve done some swatches on my arm, and immediately tried to smudge it just to see if it has legs. You can see that it has smudged only very slightly, and when I tried again five minutes later, it did not move at all. Not one bit. Given that you’re unlikely to be smudging away at your eyes in quite the same way that I did on my arm, it looks like a stayer. I’ve had it on my eyes for a few hours and it is still in mint condition, although I would say a little of the metallic effect has worn away although there are still some of the blue sparkles glimmering away. For £6, I’m impressed. It launches July.