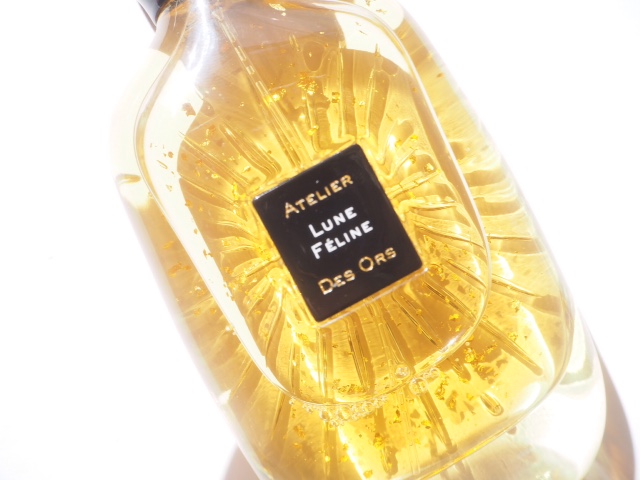 One of my friends wears Andy Tauer’s Orange Star fragrance – it’s her signature scent and there are very few people that can carry it as well as she does. Atelier des Ors Lune Feline falls into the same category (although smells entirely different) of being a big, overblown fragrance that can very easily wear you rather than the other way round. There’s nothing subtle about this at all.. people will know you’re wearing it, so if prefer your fragrances discreet, look away now!

I’d describe Atelier des Ors Lune Feline as opulent; it’s all spice and wood mellowed out by vanilla and musk with a sprinkling of flowers, too. My nose is picking up the woods but also the ambergris and I’m thinking it’s the kind of fulsome, embracing scent that men would think is very sexy on a woman. Don’t ask me why.. I just think that! You certainly won’t be forgotten once you’ve worn Atelier des Ors Lune Feline, but I think it’s a perfume, like Orange Star, that will only settle well on certain people; definitely not one you can just spritz and go!

The bottle, by the way, is stunning – etched glass, a heavy stopper, supremely tactile – so it might be no surprise to learn that you’re paying £225 and it’s a Harrods exclusive. Oh, and I forgot to mention that there are fragments of gold leaf in the juice – for no other reason than luxury aesthetics.