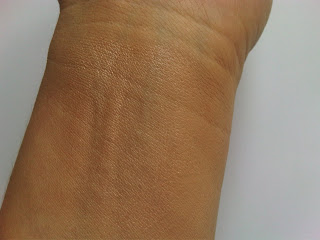 Ok, so I finally got to see the Garnier BB cream. There are some embargo restrictions on this so I’m not showing the packaging which isn’t actually in its final stage yet so you aren’t missing anything.

I have got some swatches though. The cream, in texture, is typical of other BBs I’ve seen – quite thick in a foundation consistency which then transforms into much thinner cream when rubbed in. In fact, the one thing I wonder about is whether it will give quite enough coverage. The thing it will give is luminosity – it is packed with light reflectors (no glitter, thankfully) so it will give a very radiant look. The formula is hydrating – it glides over the skin giving a dewy finish and Garnier trademark components including caffeine amongst other high tech ingredients for the skincare part of the cream. The third component is SPF15. I’ll reveal more about the ingredients nearer the launch time.

All in all, I’m pretty impressed so far – there were no medium shade samples other than a tiny, tiny pot so I dabbed my finger in and swatched that straight away. The lighter version I was able to do at home.

What makes this different to Asian versions of BB cream is that it lacks the ashy undertones. Asian BBs offer a greyish tone to desaturate the colour of the complexion and whiten and brighten Asian tones. European tones don’t generally need those elements, so this is far better suited to us without the grey pigments. The Garnier BB will retail in August. I’m also hearing of at least 4 other brands bringing out European BB creams so this trend is going to be massive.