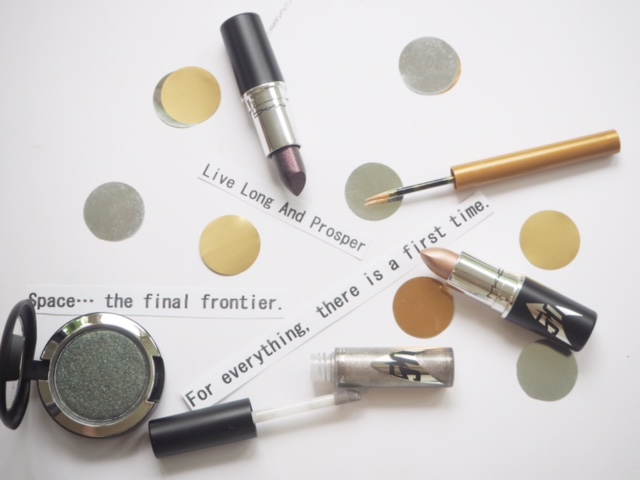 Buckle up – it’s warp speed ahead for the MAC Star Trek launch, hitting stores in September. This is one for loyal Star Trek fans and collectors, I think, although there are some very wearable shades in the collection. The inspiration for the collection, apart from straight forward inter-galactic fun, is the influence of aesthetics of gender and race. I loved Star Trek as a child – it seemed so impossible and exciting and always had a bit of a girl crush on Lieutenant Uhura as well as Kirk – obviously!

Starting with two of the Lipsticks (from four): Kling-It-On (purple frost with pink glitter) and Llap (rose champagne). I haven’t seen any of the Star Trek movies so I’m dredging my memory from the original TV version and Llap doesn’t have any meaning to me, but how many playground jokes about Kling Ons!!

THIS I will wear! I love it. Bird of Prey is a Pressed Powder Pigment in dark olive green pearl with sparkle, which makes it very shimmery indeed.

Trip The Light Fantastic Face Colour, above, in Strange New Worlds, is described a merge of coral tones but it’s more coppery with golden shimmers. There are two other shades, Luna Lustre (soft rose shimmer) and Highly Illogical (plum with golden pearl).

There are four Lipglass shades coming in the MAC Star Trek collection – this is Set To Stun (great name!) in a silver shimmer with golden pearl. Great as a top coat to glam up any shade underneath.

The MAC Star Trek will be at all MAC locations and on-line.